[Ed. Note – I continue to have difficulties including photos with the text of my blog entries, thus the delay in publishing this post – datelined Logroño, April 14th.  I have encountered a challenge not found on The Way last year, to wit, the habitaciones where I have been staying either don`t have internet access, have it but don`t make it available to guests, or don`t support it with recent software updates.  I think the difference between this year in Spain and last year in Portugal is two-fold:  Time marches on and more and more travelers are bringing devices that connect with the web using wifi (available at every hotel, alberque, and bar in Spain), and the economy of Spain is better than last year`s economy in Portugal.  Fewer folks want access to the web using a PC and so the hospitality industry locally doesn´t spend the time, energy, and money to provide it.  Local libraries do, however, and that`s where I`m generally able to polish and publish.  With that preamble . . . .]

Pamplona is a delightful city with a strong Basque heritage and an all encompassing enthusiasm for all-things-Basque and all-things-partying. It is quite endearing. The days I spent there (one and one-half more than planned) were enjoyable if frustrating because of the electronic challenges I faced – both in terms of acquiring a working SIM card for my iPhone, and the ongoing struggle to upload photos to this blog. Fortunately, those difficulties largely have been surmounted.

Here´s a lovely bridge I crossed when approaching the city center. 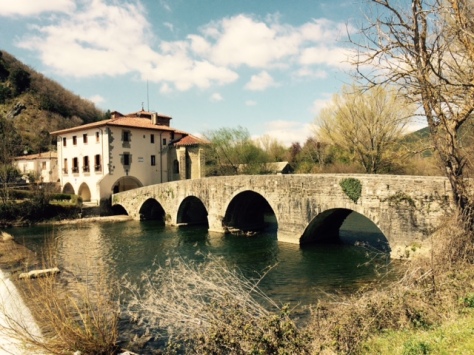 Without dwelling excessively on those challenges, I will simply report that the Way from Pamplona traverses city streets that are well way-marked leaving little opportunity to get lost – in contradistinction to my experiences in the early days of the Camino Portugues. The Way passes directly by the Public University of Navarra which invites peregrinos to enter the campus and get a stamp (“sello”) on their pilgrim passports (“credenciales”) – an “accreditation” attesting to their peregrenaciones at this point. Not a sheepskin, but a valued acknowledgment of commitment that embraces body, mind, and spirit.

The day was clear and pleasant. Perfect weather to commence the next stage on the Way.

Because of the late start, I only reached the small suburban town of Zizur Maior (its Basque name). The next day saw me taking a bus back to Pamplona to work again with the Vodafone folks who eventually, using trial and error, got my iPhone to receive and transmit data. Bravo. But half the day was gone by the time I finally returned to Zizur Maior, retrieved my backpack, and set out on another short day. The Way passes stacks of hay bales reminiscent of scenes from Martin Sheen´s movie, The Way.

And further along, the Way passes the ruins of the Guendulain palace dating from the 16th century.

Eventually, the Way brought me to Zariquiegui, a small village on a hilltop amid verdant fields. A tour of the town took seven minutes, but the views were spectacular. 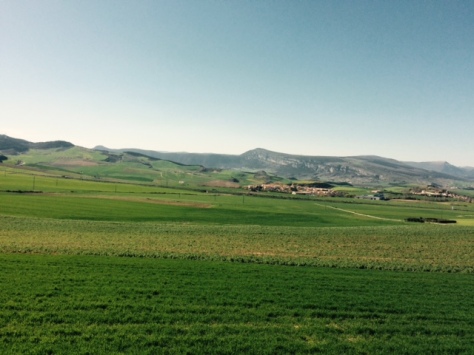 I checked in to Alberque San Andres, a clean and welcoming facility. I shared an 8-bed (four bunk bed) room with a Swiss lady of about my age, a young Spanish mobile-app developer between gigs, and a delightful young lady from Taiwan whose English was impecable. In the adjoining room were three other peregrinos with whom I would walk in tandem for the next several days – an architect from Newcastle, England, his nephew who was walking a bit of the Camino in anticipation of his wedding a few days later, and an educator from New Zealand who had just completed her service as the principal of an international elementary school in Germany. Though we did not become a “Camino family,” we did hang out together, along with others who formed kind of a loose cohort of peregrinos all headed along the Way at the same time.

My friends have since continued on beyond Logroño while I have lagged behind to enjoy a recovery day and to post to the blog. I hope to catch up with them. We have become good friends in just a few days on the Camino. Such is the nature of the Camino.

The climb out of Zariguiegui the next day was steep and windy. No doubt a consideration in the placement of the windmills on the ridge! A sculpture honoring peregrinos graces the crest of the mountain. 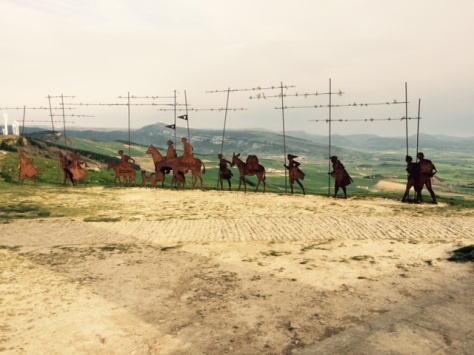 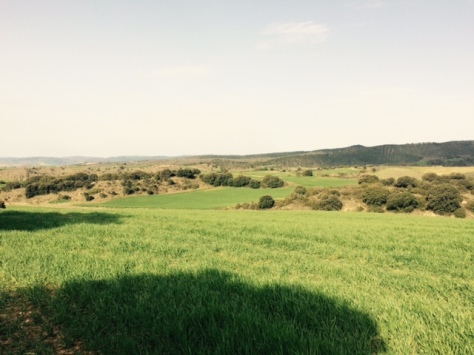 Later that morning, I decided to pursue an alternate route along the way to visit Santa Maria, a small church in Eunate (near Obanos).  It is Romanesque and octagonal in design, built in the 12th century.

The church was not yet open when I arrived. I stretched out on a bench and took a brief nap. When I awoke, I discovered that a peregrina from South America had also arrived. She kindly offered to share the bread and cheese that she had had the foresight to bring with her (it now was well past midday). I accepted with thanks.

I set out to explore the grounds and eventually returned to the door to the sanctuary which by then had been opened by the warden. My fellow pilgrim was on her hands and knees before the alter in a supplication and prayer. I waited respectfully. In time she arose, overwhelmed with emotion, and tears in her eyes. I offered a hug. She accepted. 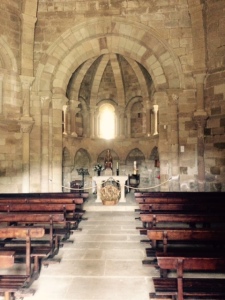 The sanctuary is small and only dimly lit. Recordings of Gregorian chants enhance the experience which encourages contemplation and prayer.

That evening she and I found ourselves at the same table where we were partaking of a “Menu Peregrino,” a simple three-course meal served by many alberques and restaurants along the Way. I had a delightful conversation with her. She is an attorney who has devoted her career to defending economically disadvantaged youth in her country. The faith is quite strong with her. She hopes to walk the Camino de Fatima upon completing the Camino Frances. She intends to reach Fatima in time for the annual festival commemorating the vision of the Virgin seen early in the last century by three young children of Fatima. I saw her again a couple of times, but by now she has gone on ahead.

The Way at this point traverses interesting and varied territory. I´ll let some photos tell the story. 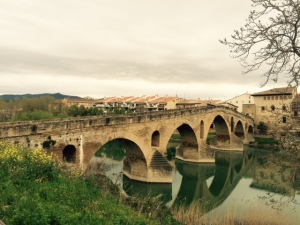 Armorial crests on homes and other structures in Cirauqui. 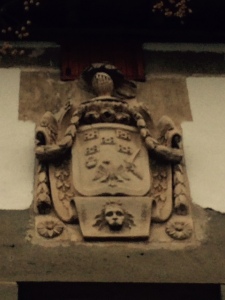 Leaving Cirauqui through an ancient archway and a steep climb that follows. 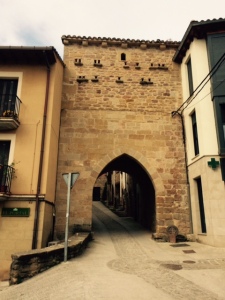 On the way, with other peregrinos in the lead. 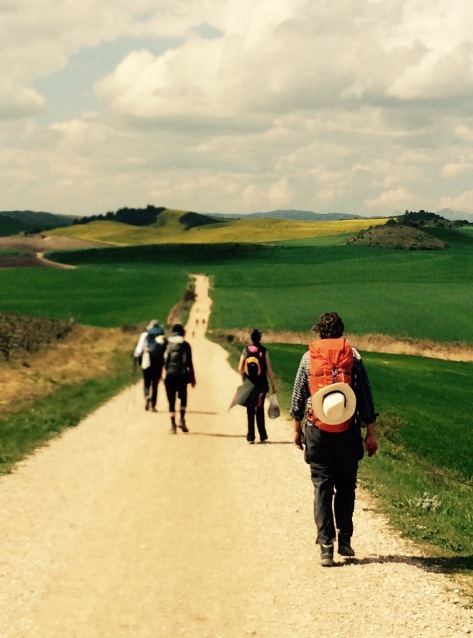 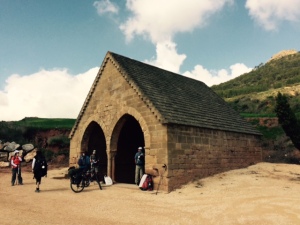 Last night was spent in Viana where I rested before the final push this morning into Logroño.  In the afternoon, I passed several refugios – stone huts built centuries ago and still stanidng.  Built toprovide shelter to earlier peregrinos who might find themselves exposed tothe elements between the pilgrim hostals of the time (often churches and convents encountered on the Way), local townsfolk regularly brought food, water, and kindling to these huts in order that the travelers would have the means to stay strong and healthy,and to continue their pilgrimages. 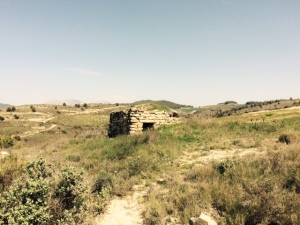 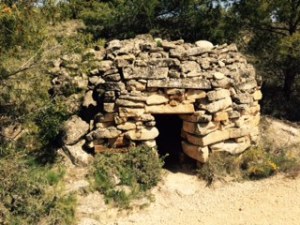 Somewhere along the Way at this point, I left Navarre and crossed into the famous wine growing semi-autonomous region of La Rioja.  Navarre was Basque country with many reminders of the separatist sentiment that is strong with the Basque people.  Here are four such reminders.  The first is a menu written in two languages – first Basque, then Spanish. 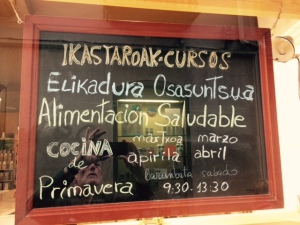 Note the difference in the lettering.  Both use the Roman alphabet, but the Basques do it a bit differently.  The second is a street sign. 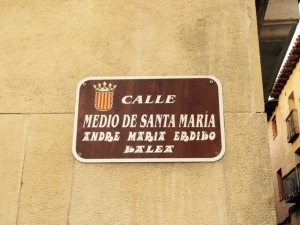 The third and fourth are political slogans found on walls just before entering the final push to Logroño.  Green is the color favored by the Basques. 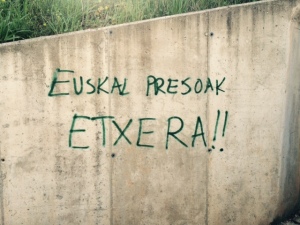 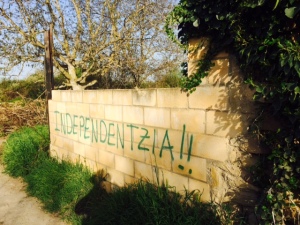 I am intrigued by what I sensed traversing Basque country.  I´ll have more to write about that when I return home.

I arrived in Logroño about midday today, in the company of other peregrinos I have met recently. Such is the nature of the Camino.

I found comfortable accommodation at an alberque near the Cathedral and was able to replace several necessary items (sink stopper, cell phone stylus) I had lost en route.  The source, as in Portugal, was a Chinese Bazaar.  Every big city on the Iberian Peninsula seems to have one.

There were many people out walking during the early hours of the day (1000-1200) and early evening (1800-2000).  I was struck by how many were muslim women, covered, in conversation with each other, and guiding their children along their paths.  North Africa is not far away. 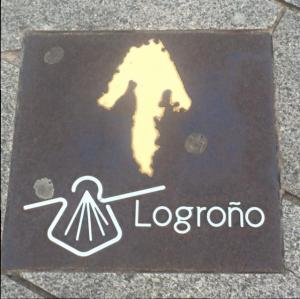 Lograño is a bustling city of about 155,000. It welcomes peregrinos with waymarks and with a statue in a plaza honoring modern day peregrinos.  Note that there are two peregrinos.  Compare this statuary with that in Pedron last year (see FCB #9).  That one features a solo peregrino walking the Way.  The pair in Logroño features two more contemporary peregrinos with determined visages.  The leader is a peregrina with a pigtale.  A sign of the times along the Way! 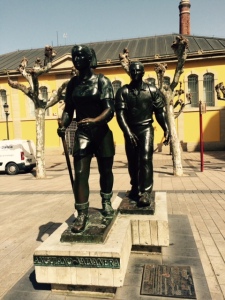 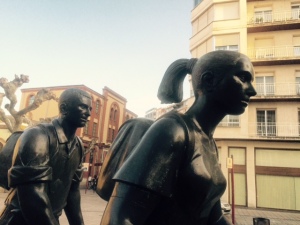