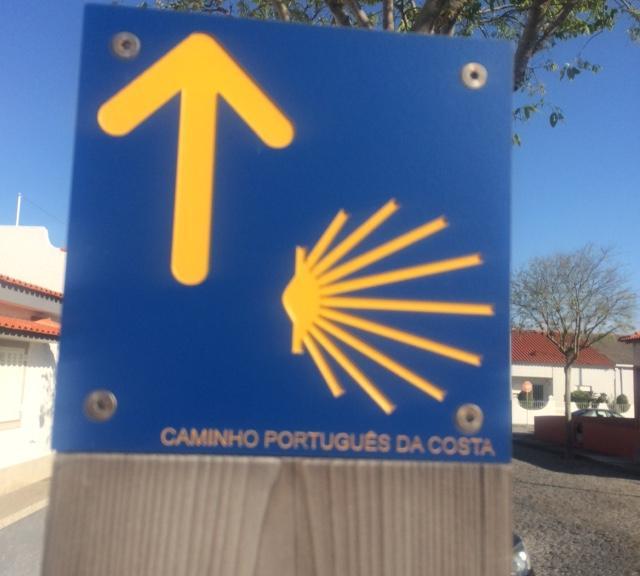 I was up timely, collected my pilgrimage gear, had a decent breakfast, and set out for Santiago de Compostela – about 173 miles on foot, and 17 miles by boat away. I had a sense of anticipation, and a certain exhilaration as well! It was good to be back on The Way!

I picked up the waymarked path just outside my hotel and walked down to the Rio Douro and followed the river for most of the rest of the day. I should clarify that there actually are two paths that meander north along the coast and often intertwine. There is an “official” Caminha da Costa (the Way of the Coast), and there is the Senda Litoral (Coastal Path). I began with the Senda Litoral and generally preferred it to the Caminha because it hugs the coast more closely than the Caminha, which often travels the coastal hills rather than the shoreline.

Porto once had a very extensive trolley system. A small portion has been retained for tourism purposes. The alignment is generally single-track with passing turnouts strategically placed. San Francisco borrowed several of the little, single-truck trams when it inaugurated the Trolley Festival in 1983 (replacing the cable cars while that system was rebuilt). I came upon one of the tourist trams that was attempting to reach the end of the line adjacent to the river. Its progress was blocked by an auto that apparently had been parked on the tracks for an extended period of time. The motorman and a policeman were trying to decide what to do.  I passed it by and continued along the river. 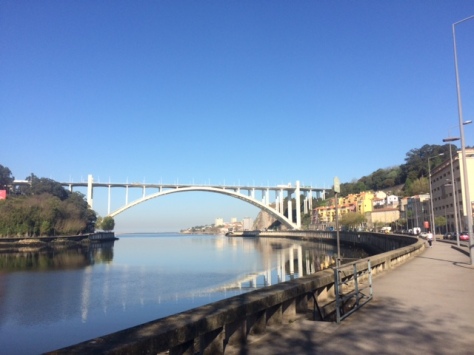 Soon the river met the sea, and the vista became more dramatic.

Public art is common in Portugal and Spain. Shortly after arriving at the urban center of Matosinhos, I encountered “Tragedy at Sea” – a set of sculptures set directly on a sandy beach and facing the ocean. The nearby plackard read as follows:

Inspired by a painting by the famous Augusto Gomes, a great artist from Matosinhos, the sculptural ensemble “Tragedy at Sea”, by Jose Joao Brito (2005) remembers the greatest nautical tragedy ever recorded on Portuguese waters: the tempest of 1-2 December 1947, in which several fishing boats sank off Leixoes Port, causing the death of 152 crew members and pain and despair in the whole community. 72 widows and 152 orphans came out of this tragedy. 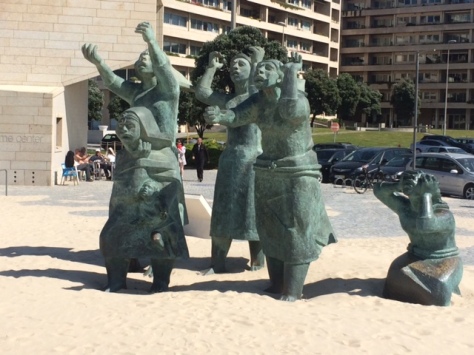 My first day of this perigrenacion was not a long one – slightly over 12 kilometers (7.5 miles). The decision to set Matosinhos as my destination for the day was a conscious one: Generally it is not wise “to launch out of the box too hard” at the beginning of a strenuous athletic endeavor. Hape (Hans Peter) Kerkeling, the German television personality who is largely responsible for popularizing the Camino, has observed that it can take 10 days “to get your walking legs.”

I arrived in time for a nice lunch, having dropped off my pack at my evening’s lodging. During lunch, I noticed two women who clearly were peregrinas. I greeted them and we talked for a time. They had set out from Porto that morning, but intended to go on much further that day. They were sisters and hailed from Slovenia. One seemed quite nervous – clearly on edge. She stepped out of the café for a smoke, and her sister told me that her sister’s boyfriend had died exactly one month before. She said she hoped that the Camino would help her sister come to terms with her loss. I hope so, too.

One reason I wanted to walk the Caminha da Costa was my one-day experience on that route during my first peregrenacion – the Camino Portugues – in 2014. It was the most beautiful day of all the Camino routes I had undertaken to this point. (See FCB #8 ) So today, I expected, would be a repeat of that experience. And it was in many respects, though the weather was much better on that day in 2014.

I departed my lodging and walked to the small port of Matosinhos. . .

. . . crossed the drawbridge and on the other side, saw a reassuring yellow arrow. 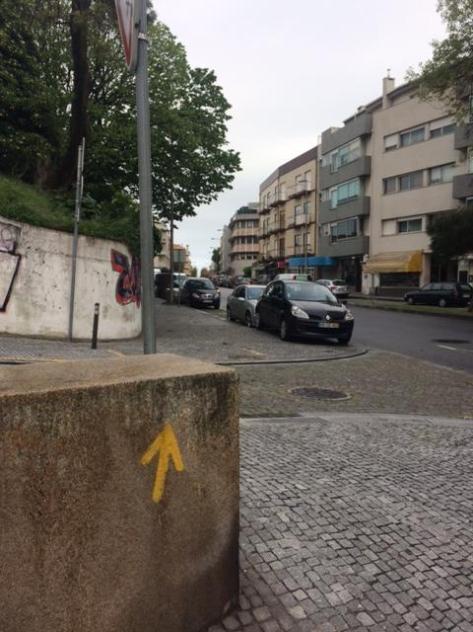 Continuing through the outskirts of Matosinhos along a heavily traveled roadway reminded me of San Francisco’s Great Highway that parallels the Pacific Ocean at The City’s Ocean Beach.

The Senda continues north, and though the day was overcast, the vistas were glorious.

As I had done four years previously, I approached the Boa Nova Lighthouse which alerts mariners to the “Black Coast” – the scene of many shipwrecks. It is the second tallest in Portugal at 46 meters. The white light from the lighthouse reaches approximately 28 nautical miles.

The weather improved during the course of the morning. I passed through a small fishing village, continued on along a network of boardwalks and accompanying views. 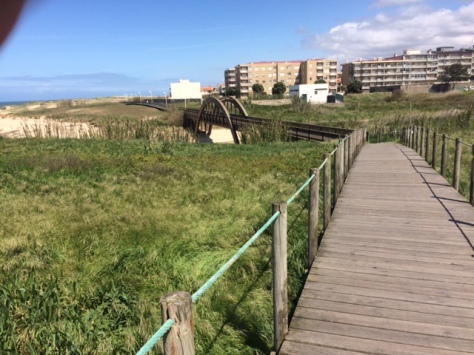 High on a bluff a cross reached out to the faithful.

Sometime after noon, I came to a small village and discovered a small café where a half-dozen young workingmen were enjoying a hearty lunch. I presented myself and the matron of the café asked, “peixe ou carne?” I responded “peixe“ (pronounced “pesche”). I could infer from her next query that she wanted to know “what kind?” I told her with gestures that she should choose. A few minutes later she returned from an outdoor barbeque manned by her husband with a wonderful a whole fish – expertly fileted, moist and tender. With boiled potatoes, cabbage, bread, sparkling water, it was the best meal I had in all of Portugal! The price? €7.50.

The restaurant was decorated with the Portuguese flag and a banner patterned after the flag of Angola, the former Portuguese colony.

I’m not sure what sentiments were conveyed by the display. Could it be support for what originally was a communist regime in Angola? Or rejection of such a state? Or perhaps a keepsake of someone who fought in the Portuguese Colonial War (1961-1974).  I’ll never know.

Later in the day, I came upon a shrine hosting what I found to be compelling religious art:

In the late afternoon, I reached Vila do Conde.

Just outside my accommodation for the night, there was more public art.

In the distance you can see an aqueduct built in the early 18th century. It supplied water to the entire city from the nearby hills. 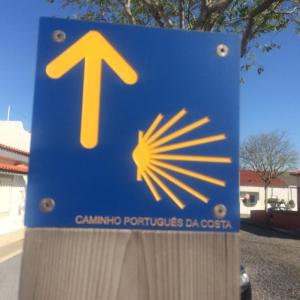 This time, the day started out on the “official” Caminha da Costa. Leaving Vila do Conde, The Way is well waymarked and passes through developed districts eventually reaching Povoa Varzim which hosts a handsome church.

Back on the coast, I encountered a small windmill – not presently in service.  It was the first of many such structures (sans the arms to hold sails) that dot the coast.  I was unable to determine whether they were used to pump water, grind grain, or for some other purpose.

During my travels this day, I met a trio of peregrinas, two of whom were sisters hailing from London, and one of whom hailed from Slovenia. We walked together for several days. The sisters were raising money for a school back home. They had been sponsored by many friends and parents who applauded their travels on the Caminha da Costa.

Entering Esposende, I came upon a statue honoring the work of a local priest.

The Way proceeds through some challenging country, and into every pilgrimage, a little rain must fall. . . 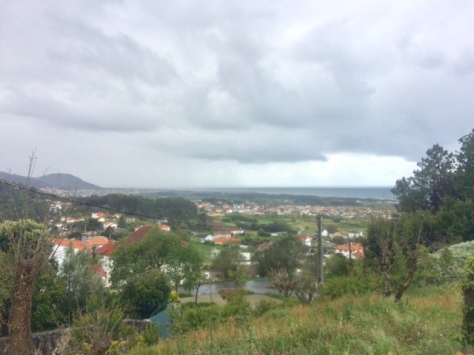 My Caminha friends from London offered to take my picture after we successfully exited a long wooded stretch with intermittent rain.

We passed by a lovely shrine en route. 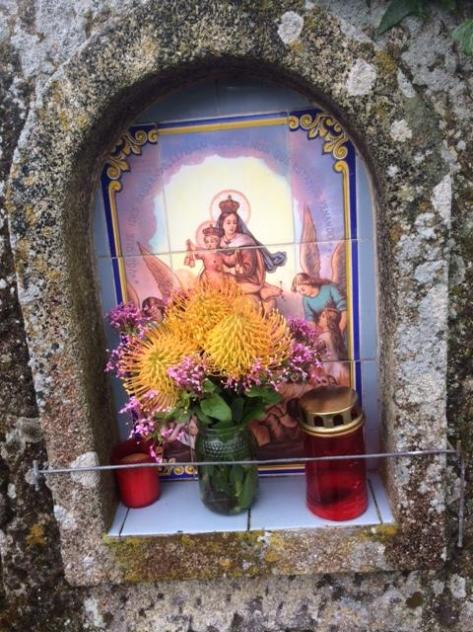 Viana do Castelo lies on the north bank of the Rio Lima. The Caminha shares a bridge with a highway and a railroad. We made it safely across but swiftly became lost. The waymarking is not the best in Viana, however upon reaching the old town section of the city, we were greeted by a charming display of umbrellas.

After an early breakfast, I met up with the peregrinas from London and Slovenia and we hiked up and out of town.  They were continuing on the traditional Caminha route and had farther to travel that day than I.  I accompanied them through the suburbs and into the small farming villages that form the “exurbs” of Viana.  After an hour, we set out on our separate ways.  There were hugs all around, and of course, wishes of “buen Camino!” I headed toward the coastal town of Areosa and the three peregrinas continued on their way.

I spent the balance of the day on the Senda Litoral, many segments of which have been greatly improved to attract the attention of, and footfalls of, peregrinos from all across the world.

It was a lovely day, and the views were rewarding.

The Senda passes the ruins of the Forte Paco.

The improvements to the Caminha include paved sections, graded sendas, and extensive runs of boardwalks.

Ancora is across the inlet which must be circumnavigated. The system of boardwalks is not wholly complete, requiring a final arrival in town by walking quite a way on soft beach sand.

After checking into my lodging, I explored the town – discovering a Festival of Flowers gracing the town square.

And many decorated bicycles! 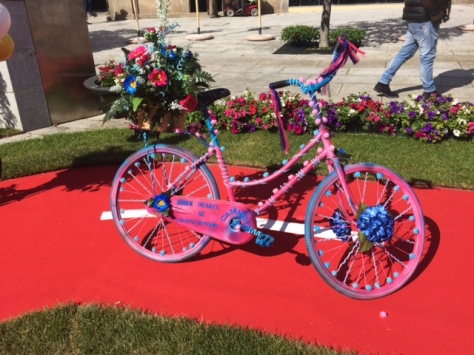 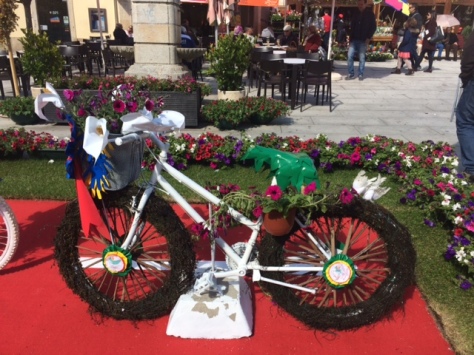 A commuter railroad stops in Ancora.

I returned to my seaside lodging, enjoyed the vista, had a good dinner, and slept well.

The morrow would bring my last walk along the coast in Portugal. Tomorrow the Caminha da Costa would become the Camino de la Costa.

If you would like to receive email updates as entries are posted, scroll back up to the first page and click on the “Follow” button on the lower right corner.  This feature may not be available on cell phones.