Santiago to the Sea

I was up at a reasonable hour and had a good breakfast and headed out discover the end of the earth! Santiago was overcast that morning.

After a few wrong turns making my way out of town, I found the first waymark pointing the peregrino toward Finesterre.  76.798 kilometers to go! 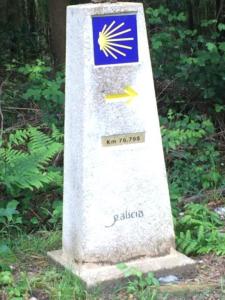 Less than an hour after finding the first waymark, the Fog City Boy cast a reflective glance at the distant spires of the Cathedral. 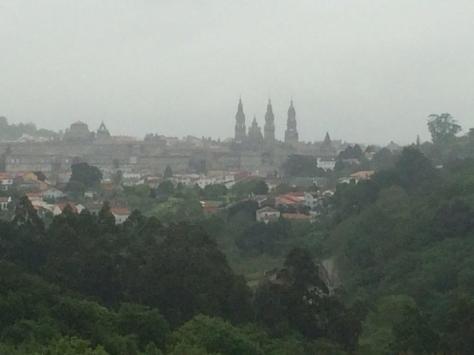 Shortly thereafter, The Way to Finesterre passes by the home of a local supporter of the Camino who made known his or her affection for peregrinos passing by.

The Way passes along shaded pathways and verdant countryside. 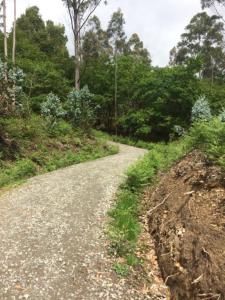 The Way continues through productive fields. . .

. . . though the gracious, unfinished residence casts an emotional shadow.

Ponte Maceira is quite a spot on The Way. The restored medieval bridge over the Rio Tambre is outstanding as are the falls.

Ancient engineering directed the flow through a water driven mill erected centuries ago.

The Way continues across Rio Tambre.

Another hour or so and The Way finds itself in the town of Negreira. It was a Sunday and most shops and some restaurants were closed. But a walk through the town brought a quiet opportunity to observe the sculptures that adorn the median of “Main Street.”

A salute to the local ranching and dairy community. . . 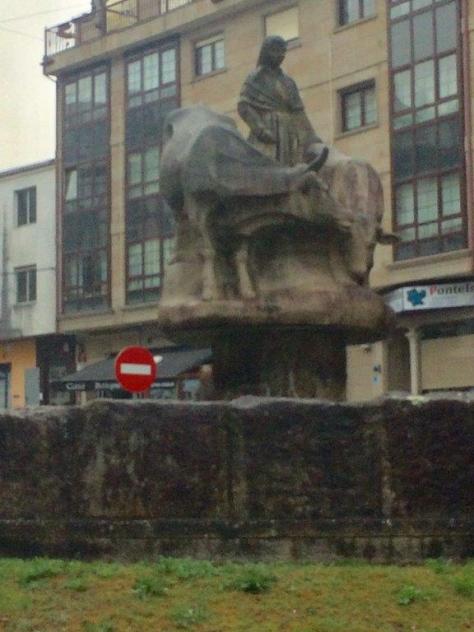 The next full stage chronicled in guide books is a transit from Negreira to Olveiroa – a distance of 34 kilometers. That’s more than the Fog City Boy felt like tackling, so he broke it into two segments. Negreira to As Moronas (today) and As Maronas to Olveiroa (tomorrow).

Leaving Negreira, the peregrino again crosses the Rio Tambre and passes by the sixteenth century church of San Xulian. 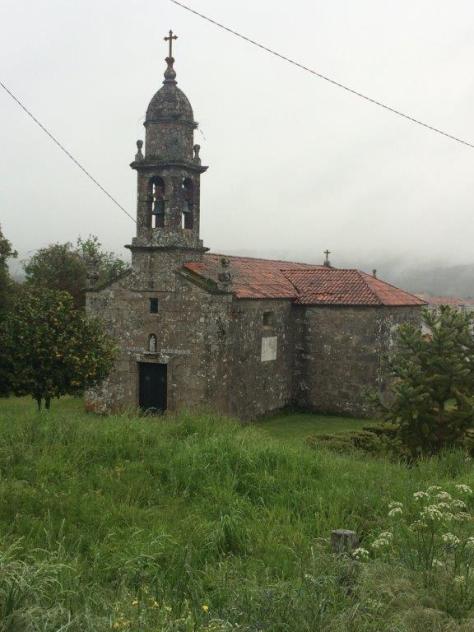 It was a rather dreary day – gray skies and occasional drizzle. Horreos (graneries) became quite common along the Way to Finesterre.

Passenger shelters for the local bus services were designed to resemble horreos – including a finial on one end of the roof, and a cross on the other! 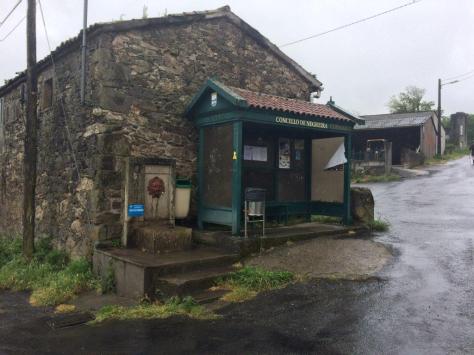 I paused at an old schoolhouse in Vilaserio that has been repurposed as a municipal albergue. 10 matresses on the floor, a couple of tables and chairs, and not much else. No one was there, the door was open, so I went in to warm up and eat a tin of sardines and an orange I had collected along the way. I think I had a small bread roll to go with it. I washed up left a small donation in the collection box in the entrance foyer and continued on The Way. Here’s a picture of the albergue I found on the web. The day I stopped there was not a sunny day!

The rain abated though the sky was overcast as I came through the farming village of As Moronas. On the outskirts of town are two enterprises – a café/bar, and a panaderia. By prior arrangement with Hotel Xallas in Santa Comba (12 km away), the shop lady called the hotel which sent a taxi to fetch me (and return me the next morning).

There wasn’t much to see or do in that small town, but I got a good night’s rest.

After a good breakfast at Hotel Xallas, I collected my mochila and was met promptly by the taxi that returned me to As Moronas. The Camino Finisterre continues through rural countryside, and emerges near a chapel of San Cristobal and cemetery.

Nearby is a camp ground and café welcomes peregrinos.

My destination for the day was Casa Loncho a casa rural in Olveiroa. I arrived in time for a late lunch, and the opportunity to use Casa Loncho’s laundry facilities. The complex includes a large private albergue and a very large and well preserved horreo, for which the albergue is named.

I opted for a room of my own which included a charming display harkening back to an earlier day. 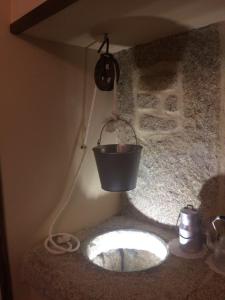 The town square is surrounded by large horreos, some still in use.  Occasionally along The Way there are newly constructed horreos, apparently “pre-fab” versions of cast concrete rather than the traditional granite. 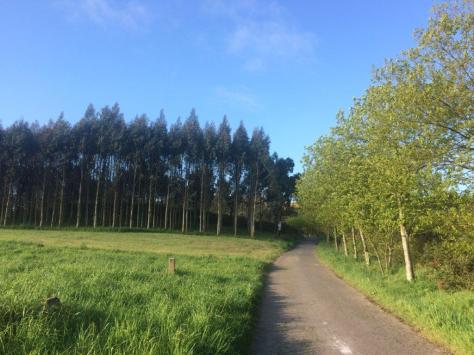 And along The Way, thistles nodded their heads at me and remined me of their cousins along the West Highland Way!

5.9 km from Olveiroa (about 4 miles), the peregrino is given the option to continue to Finisterre, or proceed to Muxia, about one day’s walk beyond Finisterre.

Many pilgrims choose at this point to head first to Finisterre and then continue on to Muxia, possibly returning to this point to complete the circuit. Some keep on going and walk back to Santiago! My travel commitments did not permit me to walk the Muxia circuit on this transit. That leaves something for a future perigrenacion! 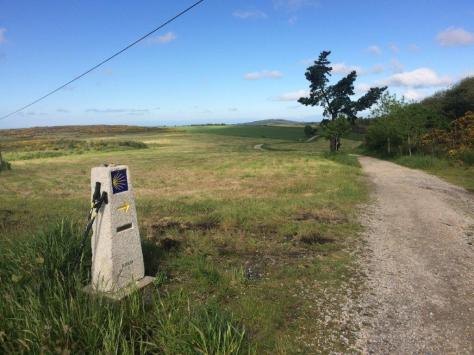 The Camino Finisterre drops down from the ridge it traverses to the Marco do Couto, an 18th century wayside cross.

Two women traveling together were resting there. We all continued together for a short time. One of the women was walking slowly but deliberately. The other matched my pace. We conversed in her broken English. I do not know where she and her companion were from.

She asked the usual questions – Where are you from? Why are you walking the Camino? Where do you go tonight? How long have you been walking? Where did you start? . . . . Do you want a travel wife?

I politely declined. She dropped back and resumed walking with her friend. I continued on alone.

A short distance later, the Camino Finisterre passes the Ermita Nos Senora das Nieves (18th century Hermitage of our Lady of the Snows).

A bit further along, it passes the Ermita de San Pedro Martir (Hermitage of St. Peter the Martyr).

This hermitage boasts a holy spring with waters that cure aches and rheumatism. 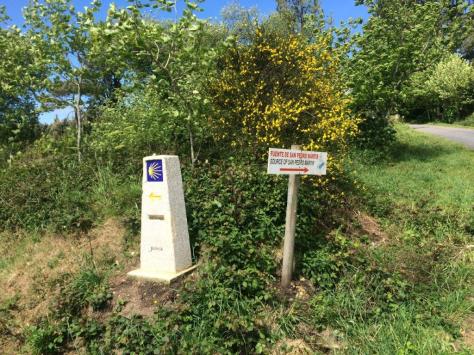 The Camino continues on. 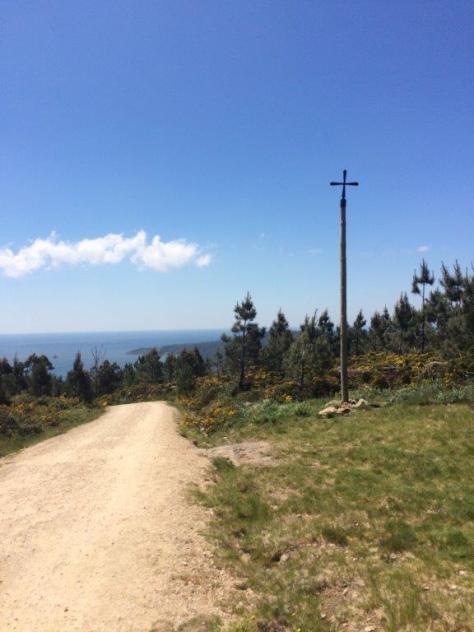 And finally descends into the town of Cee, where I would spend the night. 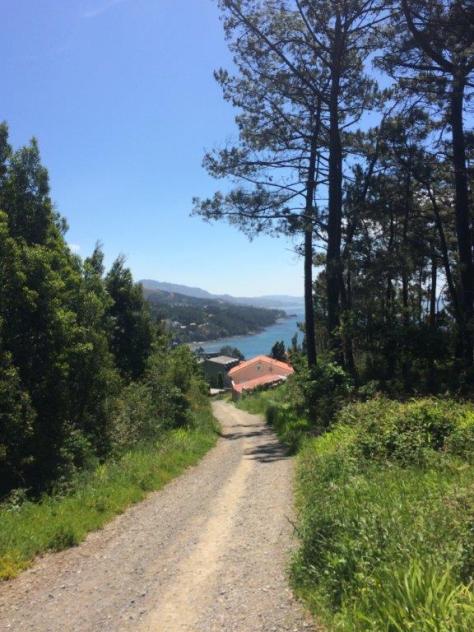 Cee is an industrial port, but importantly, the peregrino’s first encounter with the ocean on the Camino Finisterre.

The town has many restaurants and a large municipal plaza with a modern “town hall” . . .

I enjoyed a pleasant afternoon, dinner, and another good night’s rest.

The Camino Finisterre generally hugs the coast from Cee to Finisterre. (Spelled and pronounced in the Galician language as “Fisterre”.) It passes through the town of Corcubion.

Local residents often like to celebrate their heritage.  One garden sports a small statue of St. James, along with a scale model of a horreo.

In Sardineiro, I paused at a small seaside park with a refreshing sea breeze and a beautiful view.

The Camino turns slightly inland but also decidedly upward.  I encountered the smallest “lavanderia” (only one place) that I have found in all of Iberia!

In time, the Way emerges from a wooded area and the peregrino is treated to a first view of Finesterre.  The lighthouse is just visible a the far left of Cabo Fisterra.

About an hour later, I reached Finesterre.  If you talk to a peregrino who has journeyed to Finesterre, you likely will come away believing that there is nothing there but the lighthouse, an albergue where you receive your Compostela, and other peregrinos.

In fact, it is an active fishing village with a population of about 5,000, not all of whom are devoted to the pilgrims comings and goings.  There is maritime commerce there.

I located my lodging for the evening, sought and received directions to the lighthouse on Cabo Finisterre. In early afternoon, I began the final stage of this perigrenacion.

It’s a climb, but manageable.

Sights along the way to the lighthouse:

A bulk freighter lies at anchor awaiting orders for its next voyage . . . 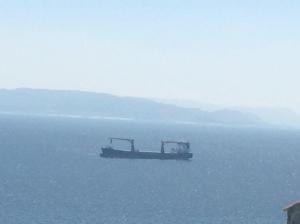 A statue of a peregrino celebrates the commitment and drive that brings together just ahead peregrinos from all across the world.

Beautiful vistas abound . . . the lighthouse is barely visible in the far distance . . .

I reached the lighthouse about an hour after beginning the climb.

An accommodating peregrina took my picture hugging the final waymark – 0.000 km to the lighthouse at Finesterre!

There was a festive air about the grounds. I celebrated my arrival at a small café near the lighthouse with cerveza y pimientos padron! Yum.

And enjoyed the view. 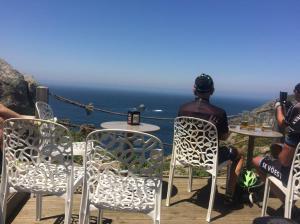 Importantly, I got the final stamp in my Camino Finisterre credential.

On the walk back to town, I and many others who had just completed their perigrenacion paused at a tall cross facing the sea. 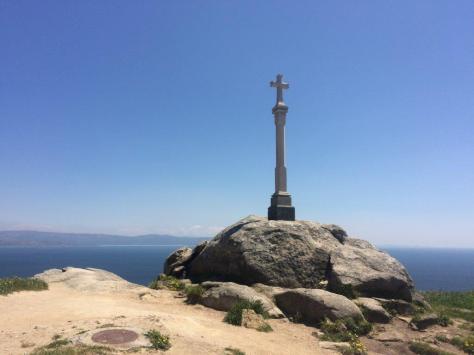 I returned to town and presented myself at the municipal albergue where a town official verified the stamps in my credential and issued me a special compostela attesting to my completion of the Camino Finisterre.

I slept soundly after a shower and a good dinner, having reflected on my travels.

I was up early and enjoyed a very satisfying breakfast at my lodging. Threw on my mochila and headed down through Finisterre to the Estacion de Autobuses. There were dozens of peregrinos waiting for the bus to return them to Santiago. After some angst about whether there would be enough seats for all who wished to travel, the bus was loaded with a few empty seats to spare.

Back in Santiago, I wandered the town, and reflected on my travels on The Way. The next day, I would begin the journey home to San Francisco, with stops in Alexandria, Virginia and Hendersonville, North Carolina. 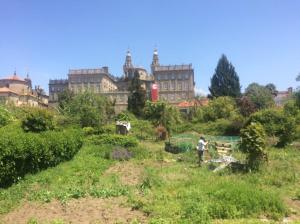 There is inevitably a spiritual aspect to the pilgrimages completed here. For me, and for everyone, I think. As daughter Elizabeth – my inspiration for my several peregrenacions – observed, “your Camino starts when you form the intention to make the pilgrimage.” That is certainly true. And, I think the Camino continues within the pilgrim long after arriving in Santiago and garnering a compostela. I know it does with me.

What’s next? Likely the Thames Path from the headwaters of the Thames River to the City of London. And after that, it would only be fitting to commence the Camino Ingles, a short but very lovely Camino de Santiago historically chosen by pilgrims from England.

Thank you for following these chronicles.  Your continued interest and encouragement lightens my load and spurs me onward!

If you would like to receive email updates as entries are posted, scroll back up to the first page and click on the “Follow” button on the lower right corner.  This feature may not be available on cell phones.