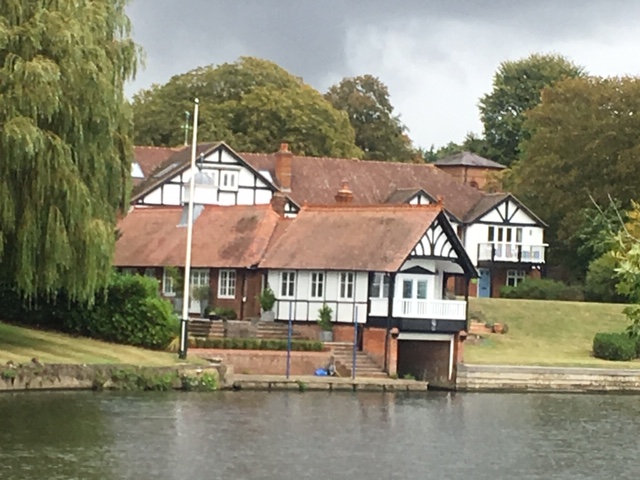 As previously announced, the Fog City Boy is reporting his most recent rambles and perigrenacion out of the order in which they were achieved. The first ramble, back in September, 2019, was the Cotswold Way (FCB #38), followed by the Thames Path – the subject of this epistle – and last, the Camino Ingles (FCB #37).

At the conclusion of the Cotswold Way and our exploration of Bath in Gloucestershire, as reported in FCB #38, the Fog City Boy and his Consort commenced onward travel to different destinations. Ginna flew to Tel Aviv to visit friends living in Haifa, and the Fog City Boy took the train to Kemble and the headwaters of the River Thames.

Kemble is a small town in Gloustershire.

The Fog City Boy with the monument marking the origin of the River Thames. There was no water to be seen, however. Other hikers reported that water from a spring is seasonal at that location.

After leaving the origin, the ramblers share a pasture with bovine occupants.

But shortly thereafter, the Thames appears not far from the Path.

Cricklade, in Wiltshire, is the first town on the River Thames. St. Sampson’s Church is the town’s dominant feature.

Flowers and whimsey are also resident.

In England, people  legally are permitted to enter fields and meadows otherwise reserved for agriculture.  The Path passes by high corn as it follows near the River Thames. 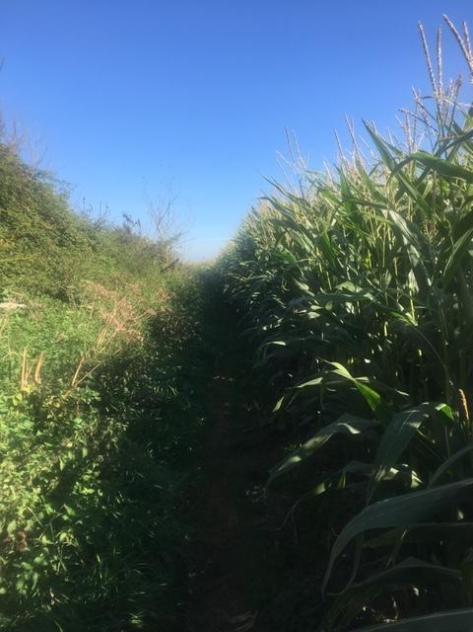 Flowers along the Path. 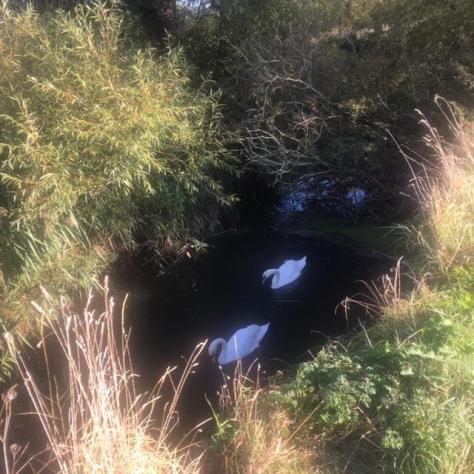 The farming communities of Castle Eaton, Kempsford, and Hannington Wick.

The Fog City Boy saw his first yacht on the Thames.

And shortly thereafter, in Inglesham, the 13th century church of St. John the Baptist. 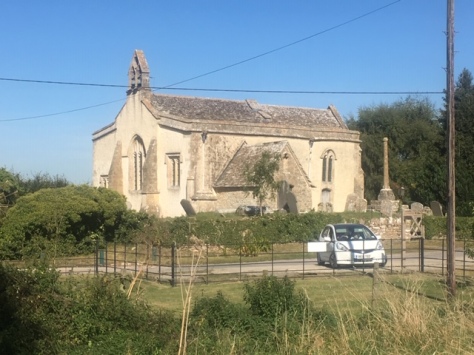 In Lechlade, a young gent rowing, and a young lady admiring.

Also in Lechlade, the first of many houseboats moored along side.

Apparently, not all the birds in Lechlade were swans.

My original intention was to walk from Lechlade to Newbridge, overnight, and continue on to Oxford the next day. However, I was advised that the 16 ¾ mile Path to Newbridge was quite isolated, did not traverse any villages, provide any services nor any place to call for a taxi should that be necessary. Due consideration of some recently incurred but transitory injuries persuaded me to proceed directly to Oxford and spend an extra day there. Not a bad alternative at all! Public transport was indirect but I had all day!

Coat of Arms of Oxford City

A carnival atmosphere prevailed when I arrived in Oxford. 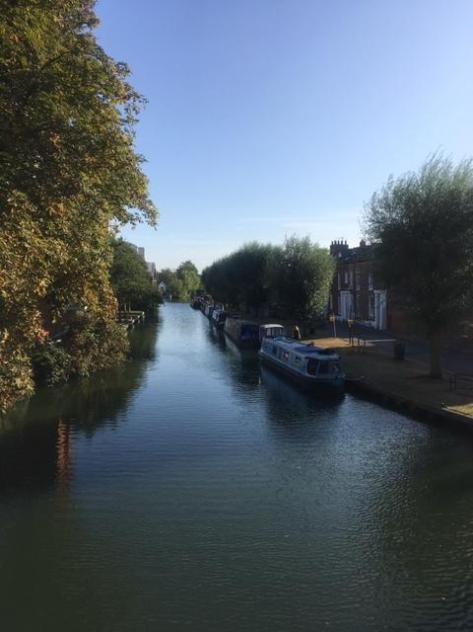 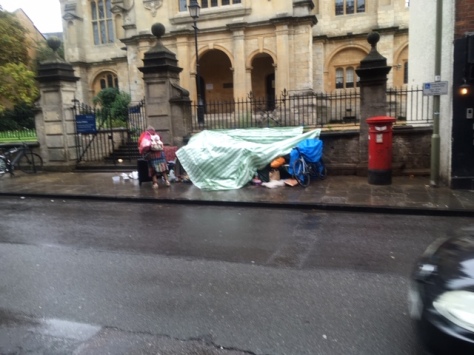 Churches and other handsome buildings prevail throughout the University district. 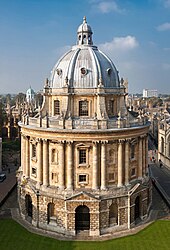 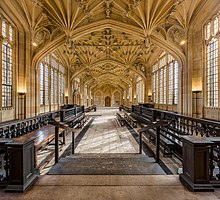 The Fog City Boy joined other visitors for a tour of the University. Here, Trinity College. 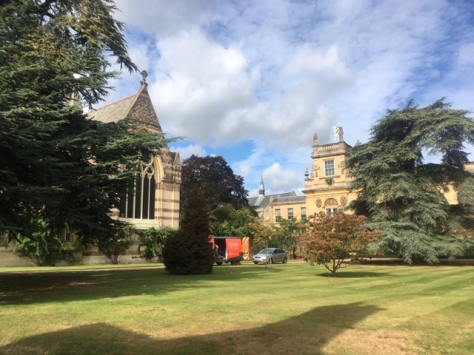 Our guide was knowledgeable, articulate, and made sure we saw Harry Potter sites along the way.

The River Thames is about a mile from the heart of the University area. And it was a gloomy morning when the Fog City Boy began the next stage of the hike. 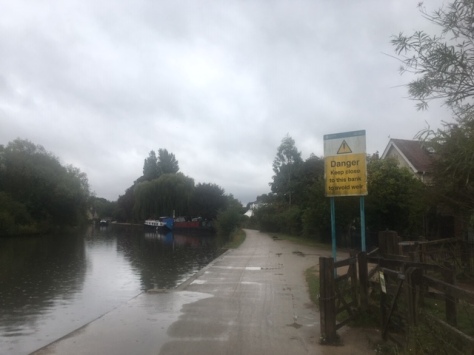 An extensive system of 45 locks and weirs allows for a considerable volume of water-bourn traffic.  The river is navigable for small boats as far as Cricklade, and for larger boats as far as Lechlade.  There is no charge for the service.  Here is Sandford Lock.

Later the weather improved and travel on the river did as well.

The Abbingdon County Hall, now a museum, is a handsome Baroque structure constructed between 1678 and 1682. Dominating the town’s historic market square, It has undergone repeated repairs and renovations over the years.

Many boathouses are maintained by college rowing teams, local clubs, and sometimes individuals. Some are utilitarian but neatly kept.  This one is at Cholsey. 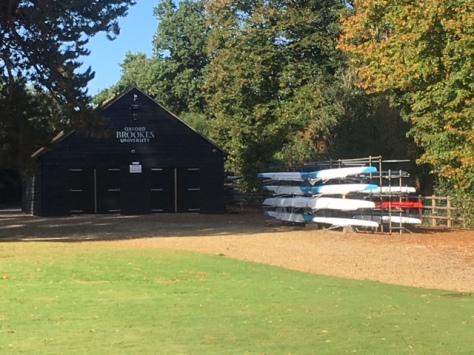 Some are grand. This handsome structure is at Long Wittenham.

Fishermen have assigned locations at various locations along this stretch of the River Thames. This one is at Dorchester. 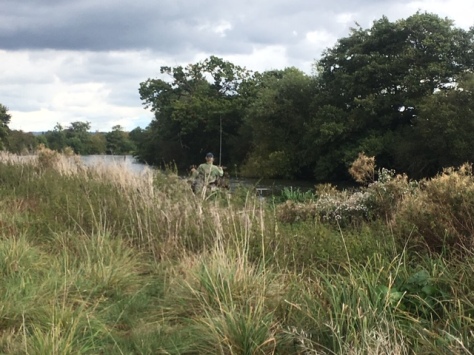 A bridge at Shillingford.

The town square at Wallingford.

Though the Path is never far from the River Thames, it frequently traverses “meadows.” Meadows is a pleasant, if misleading, euphemism for “cow pasture.” And all that goes with it. At Cholsey, the Fog City Boy followed the Path through a meadow and attracted the curiosity of a young bovine who followed for a time.

The Fog City Boy was not disappointed to pass through the next gate and continue on to a different meadow.

Later that day, at Goring – Lower Basildon – it was a grey day, but the vista was beautiful.

At Reading – Caversham, a long promenade along the River ended at a boat house where several swans were taking a nap.

At Pangbourne, the Fog City Boy and another hiker from The States, met up with a friend from London. We all stayed at The Elephant Hotel, and set out on the Path the next day. 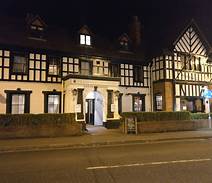 We had quite a good ramble – perhaps a bit more than we bargained for. Henley is home to the Henley Royal Regatta held annually over the first weekend in July. 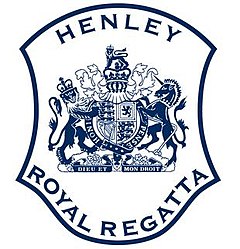 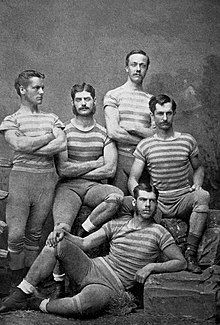 Flower boxes and other displays greeted the Fog City Boy on the Path out of Henley.

In Harpsden – Lower Shiplake the Path runs adjacent to a backyard railway.

At Maidenhead, in Berkshire County, the Fog City Boy’s lodging was nearby a lovely park with a charming fountain.

The River Thames continues to broaden.  The Maidenhead Bridge was close by my accommodation. 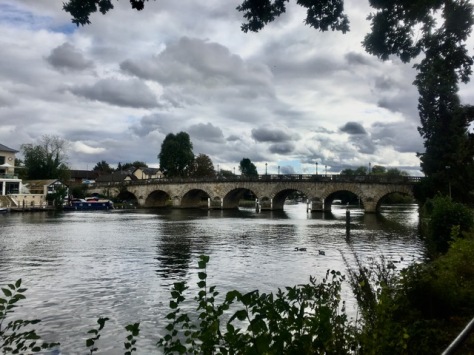 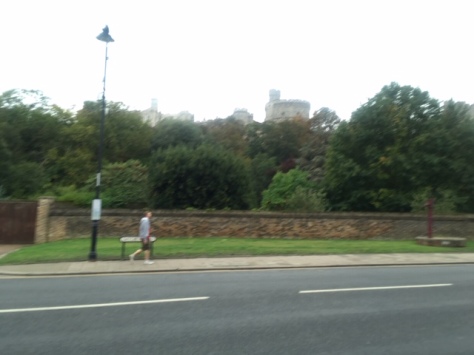 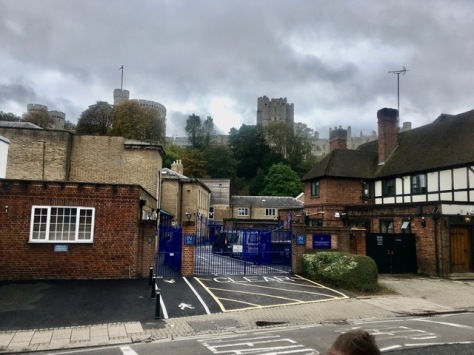 I then made my way to Staines on Thames.  I stayed at the Swan Hotel which was situated directly on the River.  A handsome property that included a deck facing the water and lovely views.

A statue of the King’s/Queen’s Swan Keeper.

Stains is the site of the London Stone, placed in 1285 and marking the customs limit and the riparian jurisdiction of the City of London. 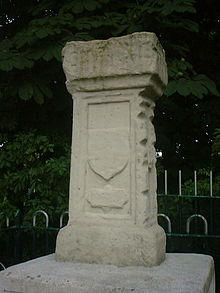 It was a lovely morning as the Fog City Boy departed Staines.

Later, the Path passes through Chertsey, where an automotive enthusiast has constructed a remarkable conveyance.

A bit farther along, the Thames at River House Gardens.

The River Thames flows into Hampton. 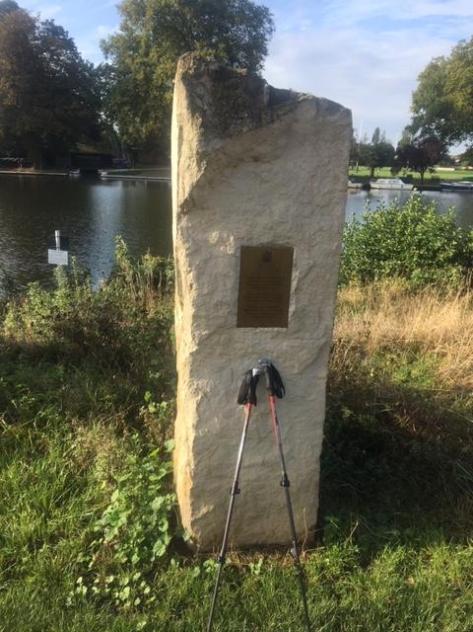 The Fog City Boy arrived in Greater London and rambled along the Path through built up venues en route.

A plaque identifies the dwelling as the home of the architect Sir Christopher Wren.

Twickenham. The River Thames is getting broader. 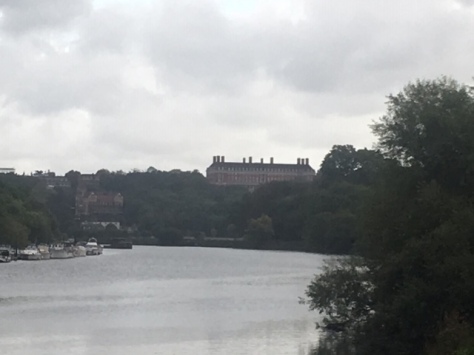 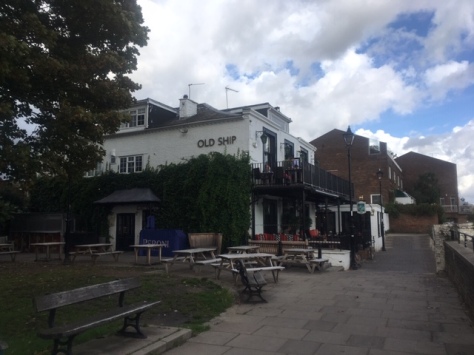 The Path continues through built up venues. Canary Wharf.

Access to Greenwich was through the Greenwich Foot Tunnel, constructed from 1899 to 1902. It replaced an unreliable ferry system and allowed workers living south of the Thames to walk to work in the dockyards at the Isle of Dogs. The Tunnel is 1215 feet long and 50 feet deep. Domed entry terminals grace each end.

The restored clipper Cutty Sark is moored adjacent to the Greenwich terminus.

Queen’s House in Greenwich.  Home to the Old Royal Observatory and longitude zero!

Two symbols of Britain that are fast disappearing in this age of cell phones and electronic communication.

The Fog City Boy was up timely and launched on the last stage of the Thames Path.

The Path provided a misty morning view of the Old Royal Naval College in Greenwich.

Farther along, if one doubted that London is a global financial center, one need only note the signage atop the office buildings across the River Thames: 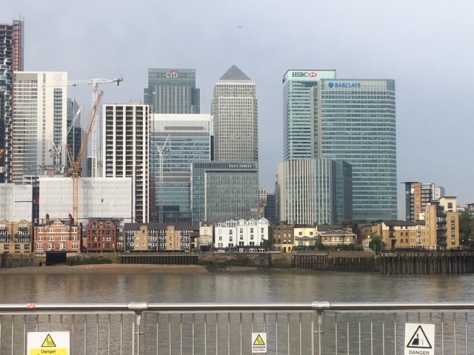 The Path continues on.  Signage provides important information to mariners. 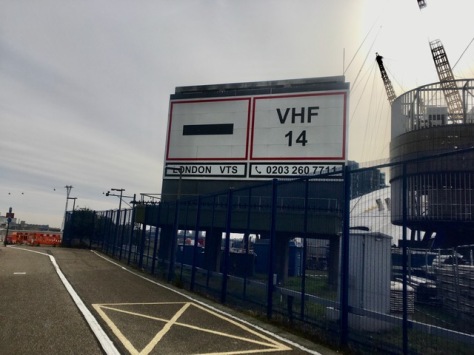 And of course, there is a mermaid on the promenade. 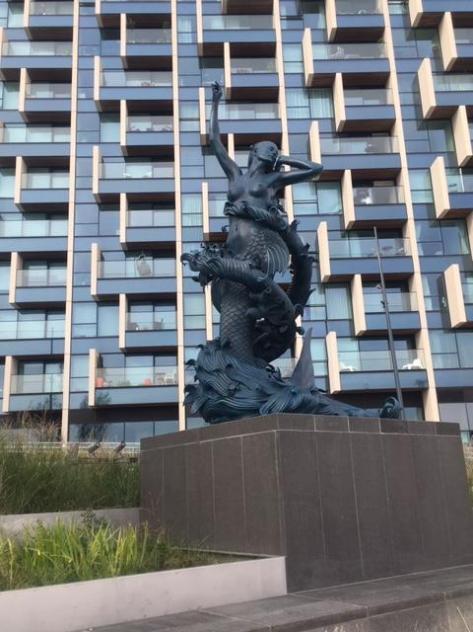 The Path crosses beneath the Emirates Airline Cable Car.

And at last, the Thames Barrier.

The Fog City Boy hiked away from the River Thames and caught the London Overground to return to downtown Greenwich to reclaim his backpack, and return again to the Overground and make his way to Gatwick Airport.

And next morning, from there to Spain and the Camino Ingles.

Whereto next? The Camino Del Norte seems like a good choice but not until 2021. Or maybe Hadrian’s Wall?  Or maybe both? Stay tuned!