Leon is a beautiful city with a long history. Many parts of the stone walls that were built to defend this ancient city still stand.

It is the capital of the autonomous region of Castilla y Leon and is home to 130,000 souls. There are may grand buildings – the grandest, of course, the Cathedral de Santa Maria de Leon. 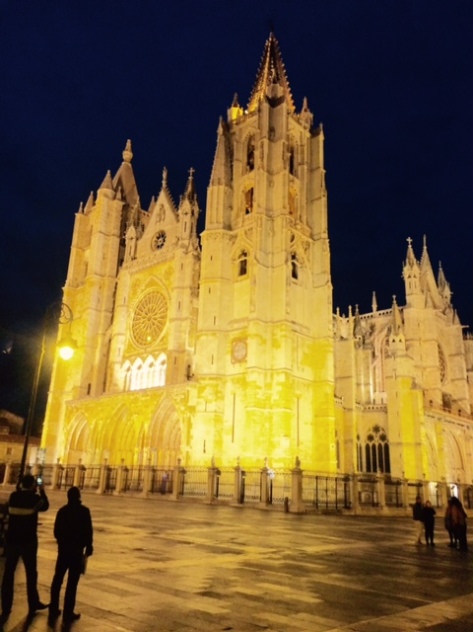 Not far away is the Plaza Mayor with its own grand buildings. And, on the morning after my arrival, a farmers’ market that was well patronized. 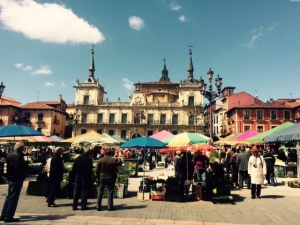 However, modern mercantile cannot forsake the influence of American culture. 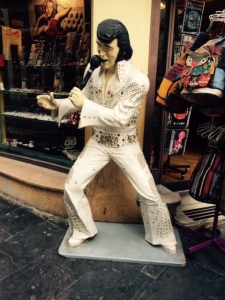 Castilla y Leon has nine provinces, three of which are host to The Way – Burgos, Palencia, and Leon.  An obliging peregrino captured a picture of me crossing from the Burgos province into Palencia. 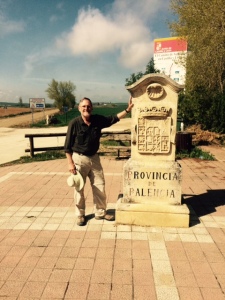 The great Meseta plains occupy much of these three provinces, and The Way makes its “way” through them.  A vast agricultural region located between 1000 and 3000 meters in elevation, it is home to many cereal crops providing broad expanses of green scenery for the peregrinos who pass through it. 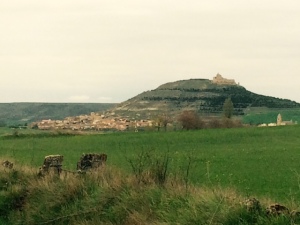 The Camino is about many things, including geographical obstacles that challenge any peregrino.  One is encountered about two kilometers beyond Castrojeriz where I had overnighted. The placid countryside abruptly produced a mountain! Actually, not a mountain, but rather a climb up to a broad rocky plain with this year’s crop successfully rooted and flourishing. Here’s the advisory to vehicles and peregrinos beginning the climb . . . . 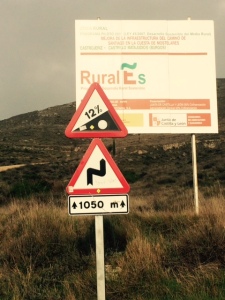 I considered the best mental approach to this challenge. For shorter climbs, I have used the device of counting my steps or counting pole clicks as I swing my walking sticks for balance and stability. I have used this techniques (counting breaths, not pole clicks) while doing long planks ata the gym. It helps keep extraneous thoughts at bay (like “whennnnn is this gonna stop?)

This time, I thought to employ the state of “no-mind,” a much more powerful, if somewhat illusive, tool to get through an extended physical challenge. It involves clearing the mind of all thoughts.

It worked. I made it to the top of the grade in 20 minutes. And it seemed like a much shorter time.

There is a monument and an area de descanso at the top of the grade.  The view of the valley from which the peregrino just climbed is extraordinary and my camera does not do it justice, but here’s my best shot.

Although a long day on The Way is certainly a physical challenge, we encountered a noteworthy mental challenge a couple of days later (and continuing for several days more). The challenge? Boredom.

Once dropping down from the Meseta, the Way shifts to an extended succession of sendas that run immediately adjacent to secondary and sometimes primary roadways. All peregrinos in my cohort of travelers agreed. Boring!

Senda translates as “pathway.” They are of relatively recent construction – say the last 10 years. They are paved with sand and gravel and good drainage is part of the design. And if the roadway goes straight without a bend for 10 clicks, so does the senda. If the roadway does not encounter a town or a monument, neither does the senda. Peregrinos have been spoiled, it would seem, with discoveries along the way to break up a day’s hike. Not so, now that the sendas are the way forward. Rumor, and a plausible one, is that the several governments through which the Way passes built the sendas because of the tragic numbers of peregrinos who died walking on the often busy highways that often made up long stretches of the Way until the sendas were built.

Happily, not all of the Way from Burgos followed paved roadways. For about 4 kilometers, the Way traverses one of the towpaths of the 18th Century Canal de Castilla – originally both a source of agricultural irrigation and transportation (hence the towpath), as well as a source of power to turn the mills that ground the corn grown in the region in times gone by. Today its use is irrigation and some recreational boating.

The system of locks is in disrepair and disuse. There are plans to rebuild the 50 locks, but I fear they will be on hold as long as Spain’s economic woes continue.

With that as a segway, I will make an observation concerning the economic woes and what I speculate are long-term demographic changes that Spain has experienced in recent years. The Way passes through dozens of small towns – populations estimated variously from 70 to a few hundred. And in almost all of these towns there are dozens of residences the fascades of which are well kept, but shuttered, and with no autos parked nearby, suggesting that they are unoccupied and have been for a time.

I think what has happened is the same thing that happened in Collinsville, Texas, my late father’s hometown, some 50 or 60 years ago. The towns, Collinsville and in Spain, were built to support the agricultural activities in the vicinity. But today, sadly, there is no need for these towns to service that activity. Industrialized agriculture means that “Dad and one son” can do the work that previously took the labor of many families.

So. . . the young people leave for the city. The family home stands vacant because there is no market for these houses in a town with no jobs, and too distant from employment to retain a viable population.

The Way passes through Carrion de los Condes where last weekend there was a major agricultural fair. Call it a localized trade show with tractors bigger than anything I have seen before!

Peregrinos have inspired communities and artists for many years, and it seems that tributes to peregrinos are increasing in number as the Way wends its way ever closer to Santiago. Here is a sampling. . . .

A few days ago, just before arriving at Terradillos de los Templarios, an ancient Knights Templar stronghold, the cohort of peregrinos in tandem with whom I am walking crossed the halfway point from St. Jean Pied de Port to Santiago! Everyone was quite pleased (and a bit self-congratulatory).  It seemed then as if we hadn’t really come far enough to be half way.  But I think we all accepted the statistic as pleasing and reassuring!

I have mentioned the “cohort” with whom I am walking. This is not a “Camino family” or an organized group of peregrinos – simply an assortment of peregrinos who find themselves on The Way at the same time and more or less in the same places from day to day. We have had conversations and shared laughs.  And occasionally snapped pictures of each other.  Here’s one of Fog City Boy posing resolutely by a hay bale in San Anton, followed by one of the Boy happily taking a break. 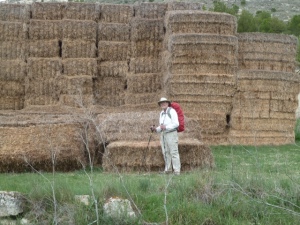 I’ll name a few names! Linda from Vancouver (the hay bale photographer). Remy from Holland and Claudia from Cuba/Spain/Miami. Jack from Holland. Julia from Sweden. (Julia bears a striking resemblance to a girl of Swedish descent with whom I attended 7th through 12th grades back home in San Francisco. Julia is charming, articulate, and is completing her studies in pharmacy in Gotheburg.) Katherine and Dana from an island in Puget Sound, who have already one on ahead. Paulette from Vancouver Island. Manuel from Bavaria. They have gone on ahead by now. The two French girls and French Canadian guy I have urged to “rock and roll” on their Camino. (Credit to A.J. for that one.) Two young German peregrinos – Flo and A.K. Michael from Newcastle. Jenny from New Zealand. Both have gone on ahead. And a remarkable trio. . . . With 9-month-old Valentina in the lead, Mom and Dad walking the Camino starting in Burgos. The family hails from a town near Stuttgart.

I saw them yesterday here in Leon, likely for the last time. Today, they have gone on ahead while I take a recovery day and post to the Blog. They hope to go on from Santiago to Finesterre, as do several other members of the cohort.

There are others who should be listed with the cohort, above. Be assured, I haven’t forgotten you.

It is the nature of the Camino that the peregrino meets many others and – for those who get the reference, just like in PMAX,  one gets to know the others in a deep but very focused way because of the shared challenges and shared experiences. Several peregrinos have mentioned to me that the Camino experience is like none other they have ever had. The ability to speak immediately to other peregrinos about the Way, their experiences there, and even issues in their lives – these are new and important experiences for them.

I think the Camino gives the peregrino permission to trust others on the Way and those along the Way who respect and cater to the needs of the peregrinos. A special thing.

Sitting at a cafe along a major street in the old town last evening here in Leon, I was found by Jack from Holland and Julia from Sweden. We agreed to have dinner and, searching for a suitable pilgrim menu came upon two Italian peregrinos known to Jack and Julia, but not to me. No matter! We all are peregrinos, after all. We had a delightful dinner together. And with that, I will close. The Italians are in the forefront, Julia on my left, and Jack on my right.

I’ll post again (hopefully – depending on the availability of a computadora) before I reach Santiago.