The Way from Leon to Sarria was pleasant, if wet. It rained off and on for several days. When the heavens opened up, I generally was able to get my pancho on timely which not only gave protection against the rain, but wind and windchill as well.

But that said, it made for a squishy path forward and muddy pants to wash upon arrival for the night.

I am taking an extra day in Sarria – a recovery day and a day to post to the blog. While the elegant hotel where I was fortunate to get a room – most of the town is sold out – had clean sheets and hot water, it could not supply a computadora but a local Western Union representative could! Thus the composition of this blog entry.

Sarria is the point of departure for many hundreds of peregrinos who are able to walk only the minumum number of kilometers (100) necessary to qualify for receiving recognition as pilgrims upon arrival in Santiago and the accompanying compostela. Sarria is 115 km from Santiago.

The hotel this morning was filled with peregrinos rolling suitcases to be ferried by bus or truck from daily destination to destination. They set out on their respective journeys at about 0830 this morning, prompting me to focus on future lodging reservations.

Lodging has proved scarce going forward, but so far, so good.

The gentle reader must be getting tired of pictures of statues glorifying perigrinos on the Camino. But two more seem particularly noteworthy. The first is a famous one in the plaza before the noted museum and parador in Leon. It shows the pilgrim with his sandles off, next to him. And a pained expression while looking skyward.

The second is on the pilgrim´s approach to Astorga, two days beyond Leon. It caught my interest because it captures use of the drinking gourd rather than simply portraying it as an accessory to the pilgrim´s staff. 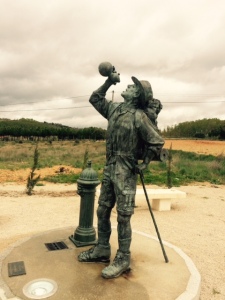 There have been many more thus far, and more to come, I am sure.

Generally, once the clouds lifted enough to see the surrounding territory, the towns and the scenery were quite lovely. Here are some images from along the Way:

Bodegas (in this case, wine cellars no longer in use) encountered on the climb out of Leon.  “Bodega” means “cave.”  These cellars were dug into the top of the hill many years ago.

A cross overlooks the approach to Astorga.

A mechanical clock in the Plaza Maior in Astorga.  The man and woman dressed in traditional garb swing hammers and ring out the time four times each hour. 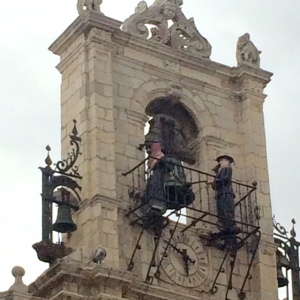 Young cyclists on a tour prepare to depart Astorga on the Camino.

The Camino has its share of excentrics in residence.

At higher elevations, the mist forms over the landscape.  It is everchanging.

When the sun emerges, the heather and other wildflowers are resplendent.

Santiago is in Galicia and crossing from the Province of Leon into Galicia is a milestone for any peregrino.

The most profound vistas of the entire Camino thus far were at O´Cebreiro, a mountaintop village a few kilometers inside Galicia. The shots below don´t begin to do the views justice. I´ll have a panoramic video for you once I get back home. The views were truly among the most profound I have been fortunate to see anywhere.

The next day, I passed a corn crib with a thatched roof – attesting to the the Gaelic heritage of Galicia.

By taking a recovery and blog day in Leon, I lost many members of the cohort of peregrinos with whom I had been walking for a time. Happily, I connected with several others who had been in an earlier cohort and now were walking in tandem with me! Such is the nature of the Camino!

I also had the good fortune to meet and walk in tandem with members of two families. The first was composed of a mom, dad, and an adult son from San Luis Obispo. We shared good times and some laughs, but have found ourselves a day apart by this writing.

Another family was a family of six – hailing from Calgary – and boasting representatives of three generations!  “Mom” – who is 77 and matriarch of the Calgary contingent – poses in front of a fonte decorated with a concha, one of the symbols of the Camino.

I have enjoyed knowing them – and like the family from San Luis – shared good times and some laughs. They have gone on ahead. Perhaps we will reconnect in Santiago. Such is the nature of the Camino!

Each peregrino carries with him or her their respective Credenciales del Pregrinos – their pilgrim´s passport which must be stamped each day to document the pilgrim´s travels on the peregrenacion to Santiago. Stamps may be had at alberques, churches, restaurants and bars along the way. I got one here in Sarria from a store that specializes in outfitting peregrinos for the Way ahead! The history the credenciales represent will be scrutinized in Santiago at the pilgrim office before granting the successful pilgrim´s compostela.

Late one morning, in a small town on the Way from Trabadelo to O´Cebreiro, I was approached by a French peregrino of about my age who called out to me and approached me holding a credencial, and asking in broken English if it were mine. I examined it and told him it was not mine. He asked other peregrinos in the cohort moving through the town, but none could claim it. Apparently, he had found it on the ground, or at a resting place along the Way.

This was a profound moment for all of us. The credencial is a very important document and one to be protected at all costs! The French peregrino and his wife had to decide – what to do?

Several times that afternoon, I thought about the lost credencial and how devistating the loss must have been for its owner.

I did not know their decision, but as it turned out, the French couple wisely took the credencial with them to O´Cebreiro where they checked into the large Alberque there.

As it happened, the family from Calgary also had checked in to the alberque that night, and Braedan (a member of the third generation in that family of peregrinos) also had been asked by the French couple if the credential were hers. In the alberque, Braedan came upon a distraught peregrina. It seems that she had lost her credencial earlier that day! Braedan remembered the name on the lost credencial. “Are you Hazel from London?” she asked. Yes she was! And so the peregrina and the credencial were reunited.

Much to the relief of all concerned! What a loss it might have been, but for the attentive efforts of the French peregrinos, and the swift recognition by Braedan.

Upon arrival in Sarria, peregrinos climb the ancient granite steps “Escalinata Maior” to the central hub of pilgrim Sarria.

The path through the old down boasts at least a dozen alberques and numerous cafes and restaurants catering to peregrinos passing through or overnighting there. 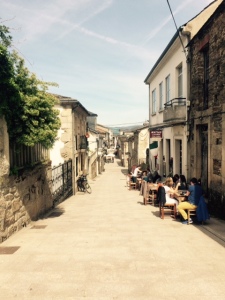 A mural captures the difficulty and hardships faced by peregrinos of times gone by, including aid given to the infirm by other peregrinos passing this way.

A cruciero caps the Way as it approches a monestery at the top of the hill.

Last night, at the top of the steps, I met up with the family from Calgary. We had dinner together, shared some laughs, and today they have gone on ahead.

And so, tomorrow begins the last week of my peregrenacion. I look forward to it with anticipation and more than a little excitement. I´ll post again from Santiago.