I walked through the Porto do Camiño at about 2:30 on Friday, May 15th, two days ago. The historic gate through which peregrinos passed for centuries is gone now, but the intersection and entrance to the old city is still there. An obliging townsperson took my picture. The Way continues into the old city behind me. 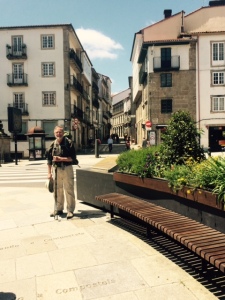 I thanked the kind photographer and continued for a few more minutes and into the Plaza do Obradorio – the plaza before the most grand and imposing Cathedral. A fellow peregrino (from Texas, it turns out) took my picture there. 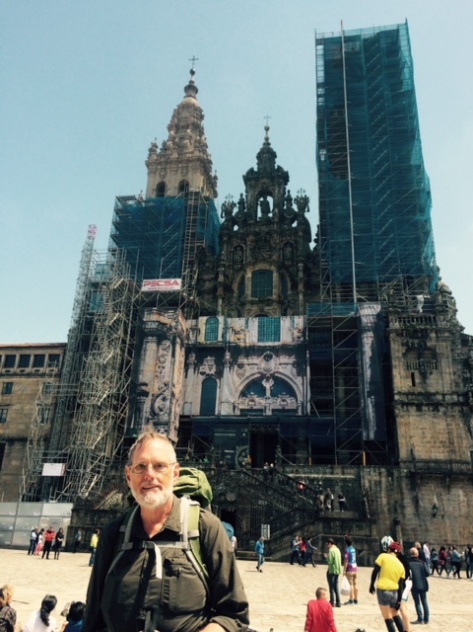 I proceded to the pilgrim office where an attendant inspected my credentiales (two of them – I had more stamps than the one issued by the American confraturnity would accommodate) and issued me a Compostela attesting to completion of my peregrenacion from St. Jean. The Compostela is written in Latin, with my name inscribed as “Knute Michaelem Miller.”  What a hoot!

I walked on through the old city, found my hotel, checked in, and went up to my room. With a bit of wistfulness, I took off my boots for the last time. 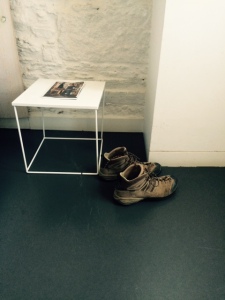 They are worn out – parts of the sole are missing or worn through. Toes and heals almost completely worn down. 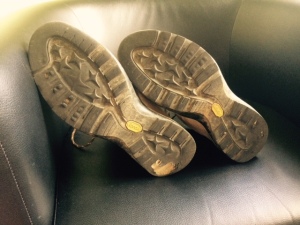 They served me well – two caminos, training for those caminos, and a dozen or more walking tours back home in San Francisco. About 1000 miles in all. Time for a new pair of boots. But it is hard to say goodby. We have been through alot together! They won’t be with me when I go to the airport tomorrow morning.

Friday night, I met up with a number of peregrinos I had encountered along The Way. It was great to see them, trade stories, and invite each other to stay in touch. I joined the family from San Luis Obispo and a peregrina from Austria for the pilgrims’ mass Friday evening. As it was last year, the mass was a moving experience for all in attendance. The swinging of the giant insense burner – the Botafumeiro – concluded the mass. It was originally used to fumigate the sweaty (and possibly disease-ridden) pilgrims upon their arrival in Santiago. Today, thankfully, its use is more symbolic than practical.

A 6 minute video of the swinging of the Botafumeiro last year is embedded in FCB #10.

I have spent my time since arriving sleeping and relaxing. Both have been productive and regenerative! And I ran into several other peregrinos I had met along the way – Manuel from Bavaria (who reported on Paulette from Vancouver Island’s Camino progress), the guy from Finland whose name I still can’t pronounce, the two Italian military guys who were doing 40 km per day, and others.  A joyous reunion each time!

I fly to Paris tomorrow.

A few thoughts about The Way from Sarria from which I last posted. . . .

There were several noteworthy changes immediately evident upon departing Sarria. The first was the dramatic increase in the number of peregrinos. They were easy to spot because most had new hiking shoes that were clean! Pardon my conceit, but my venerable boots were stained by hundreds of miles of mud, and other substances encountered along the mostly farm roads over which The Way passes.

Another change from earlier experience was the condition of The Way itself. The last 115 kilometers were much better maintained than The Way generally, with fewer ruts and almost no boulders to negotiate. I think Galicia wants to encourage peregrinos to come walk The Way, even if only from Sarria, and minimizing falls, scrapes, and turned ankles – always a risk on the rougher sections of The Way – must be part of that strategy.

And there was an intangible as well.  Peregrinos who had been on The Way for even a day or so before reaching Sarria seemed to embrace the commaradarie of the Camino more readily than did the folk who just joined in the pilgrimage.  Sure, they responded “buen camino” when greeted by other peregrinos, but they seemed less confident – probably just a function of being the new kids on the block.  And many were just that – young folks with a week off of school or before heading on to a new challenge.  Who knows?  But they were legitimate peregrinos and I was happy to have them with me on The Way.

I have not previously written in this blog about the cuckoo.  But now I shall.

The gentle reader no doubt is bracing him or herself for a possible determination that your humble scriviner is himself cuckoo.  That may be, but not because of what I now report:

A few minutes after departing St. Jean Pied de Port, I heard the call of a cuckoo.  Heard but not seen.  That cuckoo followed me, in fact, all the way to Santiago!  Every day, except in the larger cities.  But the cuckoo was there to follow me, and encourage me, once I departed the big city.

Always heard at a slight distance.  Never seen.  I heard him again in Santiago.

Well, enough of that.

The last few days on The Way brought its own collection of sights:

Granite steps and an archway leading to Portomarin. 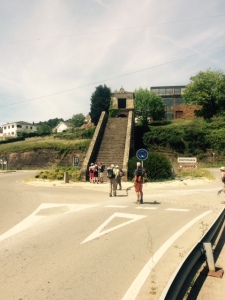 The fortress-like church in Portomarin that had been moved from the old city of Portomarin which now is submerged in the reservoir adjacent to the town. Each stone in the structure was numbered as it was disassembled, and later reassembled in its current location. The river was dammed in 1962 to create the reservoir. 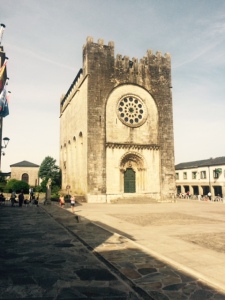 The next morning was cold and misty, denying the traveling peregrinos the greatly lauded view from atop the ridge.

Walk on, peregrinos, walk on. 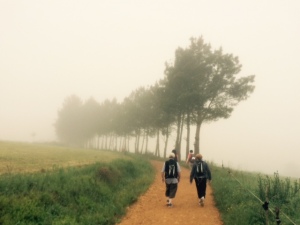 A statue of St. James in pilgrimage garb and carrying a bible marks an early gathering point for peregrinos beginning their peregrenaciones from Palas de Rei. He is facing toward Santiago. 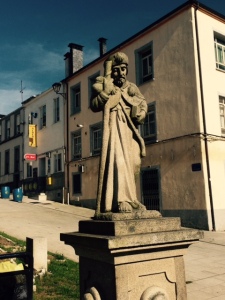 From Melide, my next stop after Palas de Rei, I had only three days walk remaining on my Camino.  I had need to repack my backpack and in the process, came upon a rock that daughter Elizabeth had entrusted to me to take with me and deliver to an appropriate location on The Way.  The rock was a true “San Francisco” rock – serpentine, common in San Francisco, and also the state rock of California.  I had carried this rock for 41 days, awaiting the appropriate place to deposit it.

I put the rock in a side pocket of my backpack so that it would be more readily accessible when the time came, finished repacking, went to bed, and headed for Arzua the next morning.

When in Arzua I enjoyed pulpo for the first time on this Camino.

Part way through the mid-afternoon pulpo lunch, I realized that I had made a horrible blunder.

At a rest break a few kilometers before reaching Arzua, I had come upon a rest area – an “area de descanso” – doffed my pack, placed it and my walking sticks on a picnic table, and put the rock there too – intending to simply carry it in my hip pocket rather than keeping it in the backpack’s side pocket.

After a 10 minute break, I collected my usual “stuff” – backpack, poles, water bottle, guidebook, hat, made sure I had my passport and wallet, and set off again.

And, yes, part way through the pulpo, I realized that I had left the rock on the picnic table.  It had not been part of my routine checklist of “things not to leave behind.”

Well, I decided to go back and look for the rock.  I was sure the area de discanso was in Ribadiso, about three kilometers back (and the day was still young).

I set out to find Elizabeth’s rock.  Or more accurately, my rock.  I started to think about my blunder.

What if it wasn’t on the picnic table when I got there?  Perhaps some passing peregrino had simply pushed it off and into the tall grass.  I would search around the table.

What if it wasn’t there at all?  Perhaps a passing peregrino would have placed it on a nearby waymark.  I checked every waymark on the way back.  No luck.

And if it wasn’t there at all?  I would find a rock of similar size and take it with me.  And deliver that one.  If rocks have a spirit, perhaps that spirit would transfer and be transported with me.

I walked to the rivulet and across a bridge from Ribadiso where I remembered the area de descanso to be. 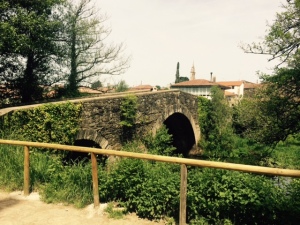 But the rest area wasn’t there!  It must be just a bit further, just around the bend.

But no.  It was almost another three kilometers, up and down several hills and around several bends.  But I found it.  And it had picnic tables.  I looked for the one where I had been.  I saw it.

There appeared to be something on the table. Was it my rock? Or just a jetizened orange peel or apple core?

Fortunately, it was my rock.

And so, my blunder muted, I took out my iPhone and using the Map app, determined that I was 5.9 kilometers from my lodging in Arzua.  I headed back, encountering a burro accompanying several peregrinos headed to Santiago.  They had stopped at an alberque, perhaps to spend the night. 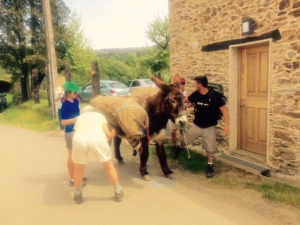 I made it back well before dark, with morale adjustment stops at more than one cafe along the way.  And when I got back to my lodging, I placed my rock safely back in my backpack.

Further along The Way, I encountered eucalyptus forests (planted years ago and still harvested for the paper pulp industry in the region).  They have been relatively common along the last days of the Camino. As in Sigmond Stern Grove, and elsewhere back home, ferns cover the floor of the forest. 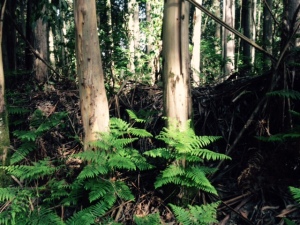 On the morning of the last day of my peregrenacion, I came upon a marker at the edge of Santiago de Compostela. Passing peregrinos had left small stones on and near the marker, attesting to their continuing journey. 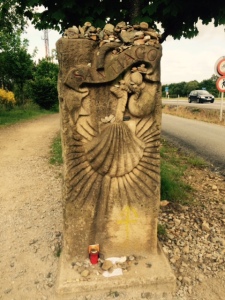 This was the place I had been looking for. 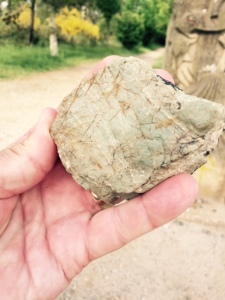 I decided to leave my rock at the Santiago marker. 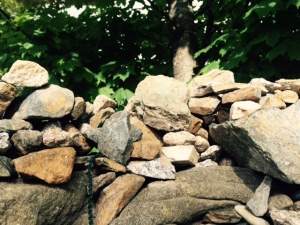 As I got closer to the old town, brass conchas in the sidewalks led the way. 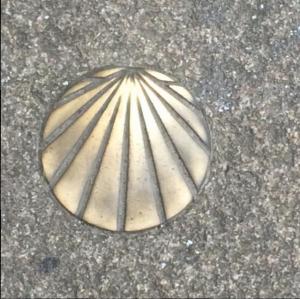 And then – first glimpse of the Cathedral. 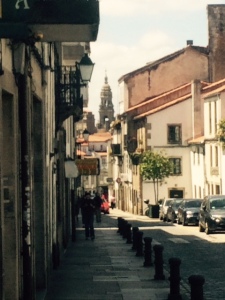 And in a few minutes, the journey was complete.

The good folks at my hotel called me a cab which responded promptly and 20 minutes later I found myself at the Santiago International Airport. Flights arrive and depart there – mostly ferrying peregrinos to and from the Way. Regular bus service is available to Sarria and other starting points along the Camino.

And gratitude for Jim’s training.  Teaching me to bring together body, mind, and spirit.

I would never have attempted the Camino, but for Jim.

I checked in at the airport, gave them my backpack, and walked around the terminal.  I walked outside and looked at the countryside.  Galicia is beautiful.  I could see Santiago off in the distance.

I listened for the cuckoo.  But he was not there.  Perhaps he was keeping his distance – frightened by the “big birds” at the airport.  But I prefer to think that he is flying back to St. Jean to find another peregrino, and accompany that lucky pilgrim along his peregrenacion on The Way of St. James.

With that, I’m off to Paris.  I’ll post again from North Carolina in a few days.