A friendly taxi driver returned me to Tineo from Pola de Allande shortly before noon that day. My lodging had been booked before I went to the festival, just as my lodging in Pola two days hence was booked before I left. So, what to do with the afternoon? As it turned out, there was a library in town and, like most libraries these days, it had a room full of computers with internet connectivity. I used the afternoon to clear my email and to make progress with my blog, and got to bed early.

The next day, I was up timely and resumed my perigrenacion. The route was moderately strenuous, but the views were breathtaking!

A panorama that includes Tineo:

Other views along The Way:

I arrived in Campiello in the early afternoon. There are two private albergues in that farming village. One is run by a charming and solicitous entrepreneur named Herminia. She actively manages a restaurant/bar, a grocery store, an albergue, and several single rooms that she rents. Also a sports club and a farm supply business.  A very nice young lady from Holland showed me to my lodging and helped me with more than one reservation for future evenings along The Way.  Her English was excellent!  She is a student of languages and working in Spain to develop her fluency in Spanish. 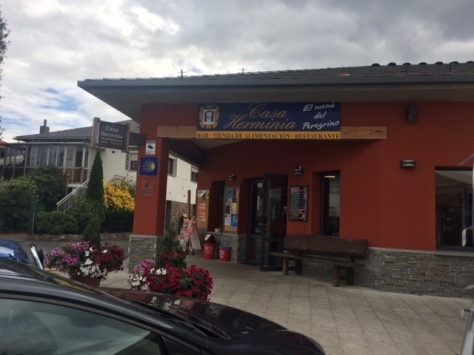 I enjoyed a good menu del peregrino that evening and met several interesting peregrinos in the process. Two were from England. One had just passed his exams and was about to be frocked as a solicitor. He and his friend were celebrating by walking the Camino Primitivo. They were on a tight schedule and were committed to making at least 30 km (20 miles) each day until they arrived at Santiago. We had a light breakfast the next morning and they were on their way.

There were four women from France who had taken what I think of as a novel approach to any Camino. Each day, three of them walked and one drove to their next destination. The next day, the driver walked and the driving duties were devolved on another member of the group. We walked in tandem for several days.

The road from Campiello starts out flat, but doesn’t stay flat. A few kilometers after Camiello, The Way splits, offering the peregrino choices.

One route takes the pilgrim on a 20 plus km hike with beautiful views but no civilization of any kind for 16.5 km (about 10 miles) – no food, no water until reaching Montefurado. The alternative is longer but takes the pilgrim through Pola where one can rest before pressing ahead. I opted for the route through Pola.

The Way to Pola involved multiple climbs and descents. 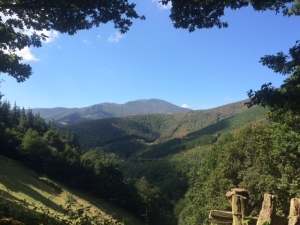 I rested much better the second time I visited Pola de Allende than the first.  But, the fiesta memories are nonetheless good ones.  I continued on the next morning and encountered a lengthy climb that took me up and down ravines as the adjacent highway wound its way ever upward.

The most dramatic climb was the assent to Puerto del Palo (elevation 1146 meters). Fortunately, the weather was cooperative. Lovely little flowers along The Way cheered the passing peregrinos. 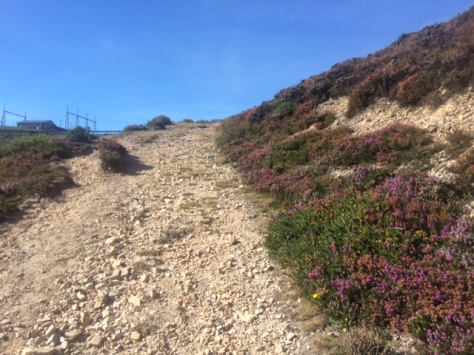 I met up with the two Americans at the crest of the mountain. The Way down was beautiful but treacherous.

The Way passes through the tiny village of Montefurado.

The Way actually passes through a cow pasture and then continues through dense mountain foliage. 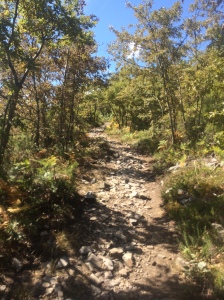 Eventually The Way winds itself down into Berduceo. I had a reservation at Camin Antiguo (which I believe to be Camino Primativo in the Asturian language) – a private albergue that could provide a private room with an en suite bath. The shower felt very good. The albergue, located in the basement of a private home, sported a “two star” rating as an albergue. This was the first time that I had encountered a rating system for albergues. The private rooms were on the second floor.

After my shower, I walked back to the center of this very small town where I found a number of other peregrinos gathered at a café/bar enjoying various refreshments. What an international gathering it was! A couple from England – he was Polish and she from Argentina. A couple from Ireland and another Irishman who would have been my contemporary. And the two young Americans. They had been very fortunate to get the last room at the pension in town. Berduceo, it seems, was sold out that night!

I noticed two Asian peregrinos – a young couple from South Korea.  They had just received that bad news that the pension in town was sold out and the albergues all were full.  Their faces betrayed a high level of anxiety.  I approached them and suggested they try for a room at the Camin Antiguo. Their English was good enough that they were able to follow my directions.  Luck was with them.  They got a room, and were greatly relieved to have a roof over their heads – especially because rain was forecast for the next day.

Meanwhile, the peregrino happy hour had continued to expand. Eventually we ran out of space at our table and moved to a larger one across the road that also was serviced by the café/bar.

And then came a remarkable, but very Camino-like, experience.

A peregrina from Holland, who likely is my contemporary or perhaps bit younger, strode up to the group and, in English, asked to address us.

She said that she knew that we were pilgrims and she wanted us to know about a telephone call she had just received from one of her sons who had called from Holland. He told her that his brother, her other son, who is in the Dutch Army and was part of the Dutch forces in Afghanistan, had been in a firefight with the Taliban. He was unhurt, but apparently, the emotional aftermath was such that he was being repatriated to Holland. The son who called would meet his brother at the airport. She just wanted to share that with us, she said.

We were all supportive of her, of course. The young American woman and I exchanged glances, but she did not volunteer her posting to Afghanistan. Later she and I talked and agreed that the young soldier undoubtedly was experiencing PTSD.

The Camino truly brings out the best in people. Peregrinos help each other in many ways. We helped the peregrina from Holland by listening, and hearing. She needed to unburden herself and trusted us to be there for her. And we were.

Peregrinos are trusting of one another. I observed this phenomenon on both of my other Caminos. There is a commonality of experience and purpose that supports an openness that none of us would allow in our regular, non-Camino lives.

There was heavy rain that night.  My room included a continental breakfast in the morning prepared by the matron of the house.  We had no language in common, but when she looked out the window and said, “malo!” I didn’t need a Spanish-English dictionary to translate her observation.

The day brought interesting countryside and a long descent through a pine forest, eventually arriving at Embalse de Salime where I spent the night. It was, indeed, a rainy day, but I had my poncho and my Tilley (hat) and my walking poles, so the day was manageable, if damp. 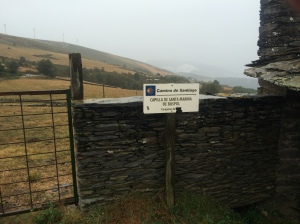 I noted that roofing materials had shifted from terracota tiles to slates. The mountain I would descend boasted frequent shale outcroppings.

The descent from Buspol was almost 6 km in length and required almost three hours.  Finally I reached bottom of the path and was pleased to encounter firm footing for the next kilometer or so!

The road led to Embalse de Salime, mostly a ghost town.  But one with a very decent small hotel and restaurant.

Embalse translates as reservoir.  And, indeed, there was a dam, a power station, and a hillside of buildings constructed to support the building of the dam in 1954.

Upon reaching the hotel, I called it a day, had a nice late lunch – a large one in the Spanish tradition – took a shower, and took a long nap.

If you wish to receive entries in the blog as they are posted, click on “Follow” in the lower right corner of your screen.  This option may not be available on cell phones.