I was up timely at the small hotel in Embalsa de Salime, downed the characteristically inadequate continental breakfast, but with an extra cup of café con leche, and headed toward Grandas de Salime. Long needle pine trees were abundant and left a lovely orange carpet at their base. It was a pleasant walk, mostly up hill, and the forecast rain did not immediately appear. 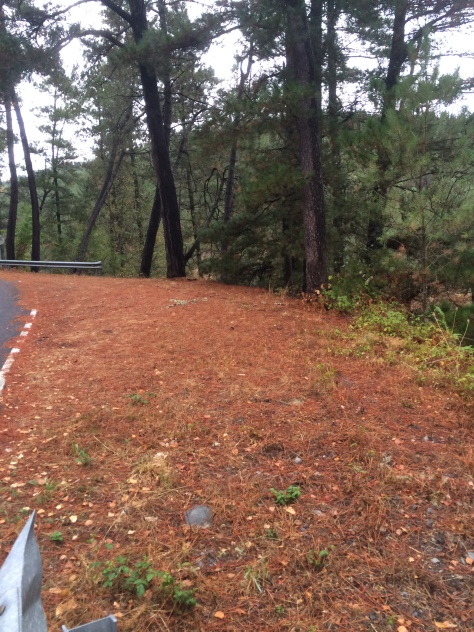 My guidebook advertised the availability of internet at the local library in Grandas. The folks at the town hall drew me a map but cautioned that the library was not open until 4:00 that afternoon. So I gave up – again – the idea of making immediate progress on this blog.

I had hoped to check into a hotel at Grandas to assure myself of lodging for the night and then strike out on The Way and make as much progress as I could, returning to Grandas by taxi in the afternoon. Alas, the hotel was full! The owner suggested that I try the pension around the corner. When I knocked on the door there, the owner appeared at a third floor window and simply said, “completo.” They were full, too. So I returned to the hotel and the kindly owner agreed to get me a reservation for the night at A Fonsagrada, about 25 km away, and a taxi to get me there. Walking the 25 km would have made the total for the day about 20 miles – something I have been known to do, but not something I relish. And the skies were threatening.

So, off I went with a pleasant taxi driver. Shortly after leaving Grandas, the heavens opened up. And I watched sheepishly as we passed a half dozen peregrinos I had been with at Berducedo. I have walked many days in the rain and generally it is not much of a deterrent. But this rain was a different rain. It was driving and cold. And the wind and wind chill that accompanied it was biting. I had hoped to walk some distance once reaching A Fonsagrada, but the wind chill was prohibitive. So, I found the local cultural center and its library where, happily, I had a good internet connection. I made progress on the blog.

Upon returning to my hotel, I found several of my fellow peregrinos there. They didn’t hold it against me that I had arrived by cab rather than on foot. Peregrinos are a charitable lot! I joined the Irish couple and we had a nice dinner together. The hotel offered a special entre which I enthusiastically selected: 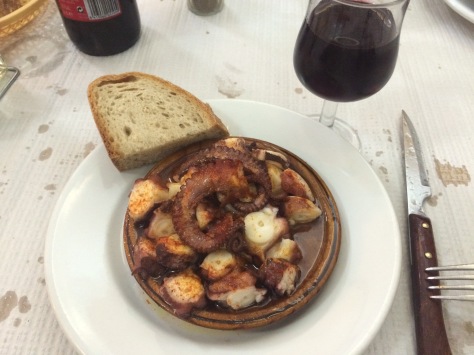 The next day brought more rain and wind. I determined to finish the blog entry I was composing (so back to the library I went) and later that day I published. I had a nice lunch at a local bar – hamburguesa con patatas fritas – and actually set out to walk a few kilometers forward.  The weather did not relent.  I returned to my hotel and threw myself on the mercy of the hotelkeeper who made me a reservation at the next significant town on The Way, Cadavo Baleira. Again, I traveled by taxi, not on foot. But fortunately, by the time I got to Cadavo, the weather had cleared and the prospects for the next day were for sunshine. Again, I met up with my fellow peregrinos. The four French women were there, as was the Irish couple and the two young Americans. We organized a large table and enjoyed a nice dinner together. 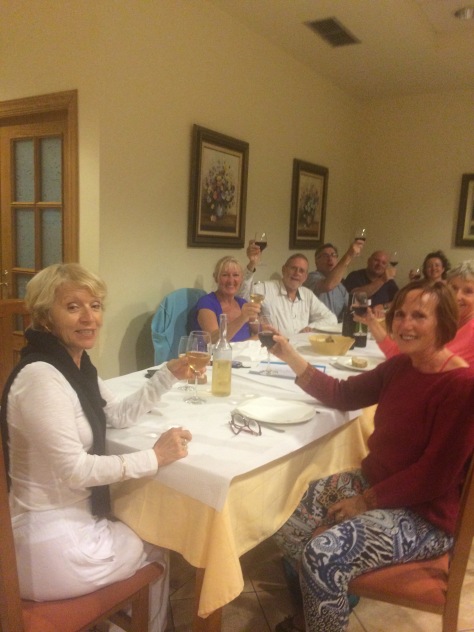 The next morning, I was up timely, had an inadequate continental breakfast, and headed back along The Way, leaving my backpack at the hotel. I would overnight there for two nights. From Cadavo, The Way traverses a succession of farm roads, passing through a number of hamlets, some of which had small churches.  The weather was a pleasant light rain for an hour or so. 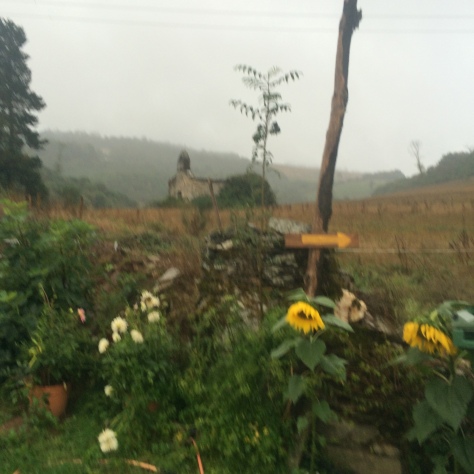 I stopped at one of the churches, took a break, and devoured a can of sardines and an orange – my “field expedient” cure for an inadequate continental breakfast.

I pressed on, passing a cross guarding a field of pumpkins. 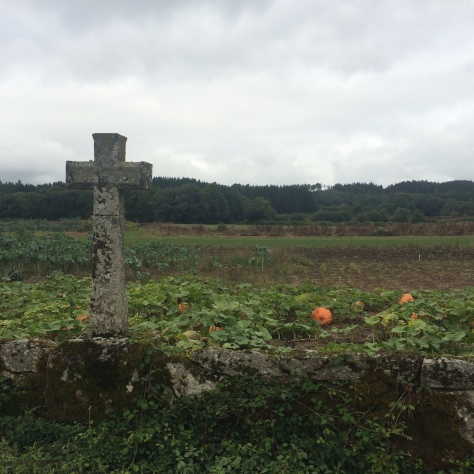 In time I came to another hamlet with a lovely church and across the street the town’s tiny plaza with seating that gave me another opportunity enjoy a quiet solitude before going on. 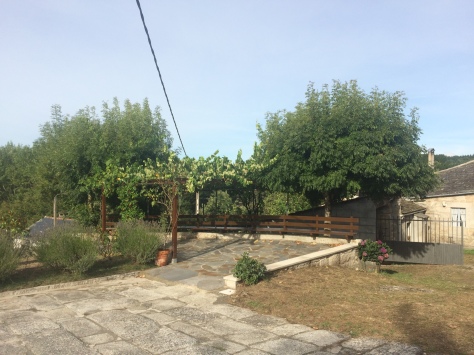 Eventually The Way arrives at Vilabade with a handsome church dedicated to Santa Maria. It dates from 1457 and is home to wonderful religious statuary and other art. It is a national historic artistic monument. 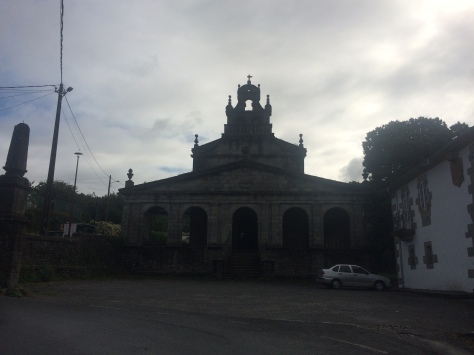 An enterprising gentleman has set up shop adjacent to the church. I paused and enjoyed a bottle of agua con gas. He was disappointed that I didn’t augment my hydration with one of his cakes and other pastries. 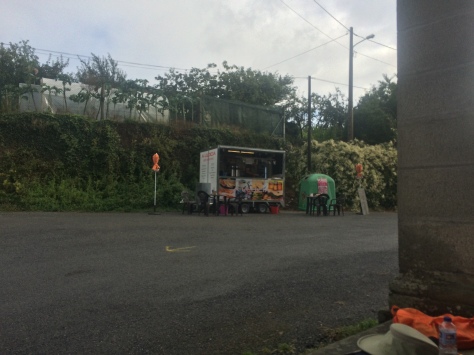 A manor house next door, Casa Grande de Vilabade, was built in the 17th century by Diego Osorio Escobar, Spain’s viceroy to Mexico. It has been restored and is available for public functions. 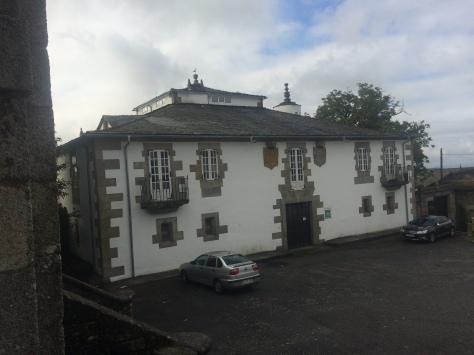 I had been dodging this tractor all morning!  The driver was a man with a mission.

I continued on along the comfortable paved streets of Vilabade, passing a comfortable home with handsome wayside cross near the entrance. 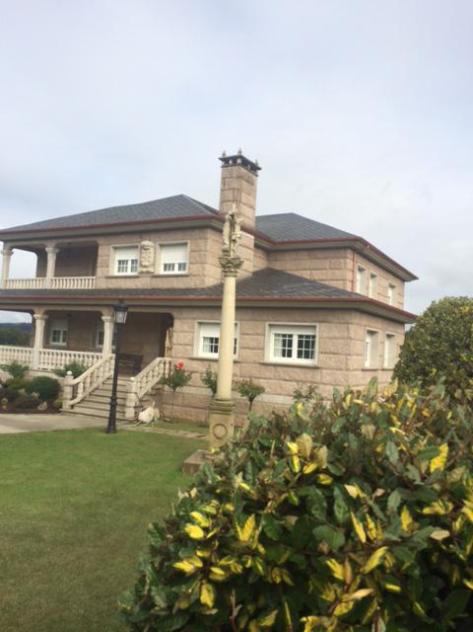 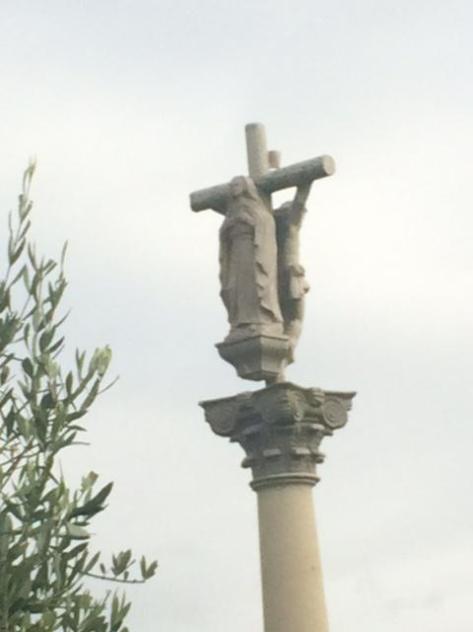 Wayside crosses are more common in Galicia than they were earlier on the Camino Primitivo route in Asturias.

I arrived at Castroverde a short time later. The town is one of some substance and appears to be a favorite of local tourists. The parish church and plaza are well maintained.

And a charming fountain graces the plaza. The sculpture is of five children sheltering under an umbrella in the rain.  And the rain is integral to the sculpture.

I had considered Castroverde as a likely place to find a taxi to return me to Cadavo. But the day was still young, the weather favorable, and I was eager to move ahead. I walked a short distance through the town and The Way brought me again into agricultural country. 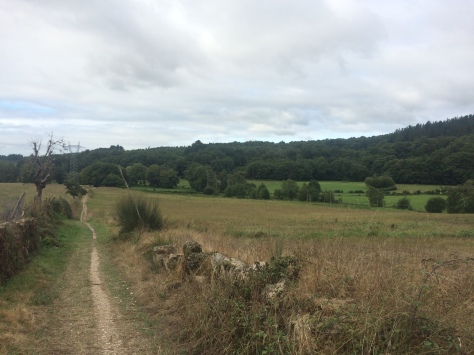 I continued as far as Santa Maria de Gondar, a small village wholly devoted to agriculture. 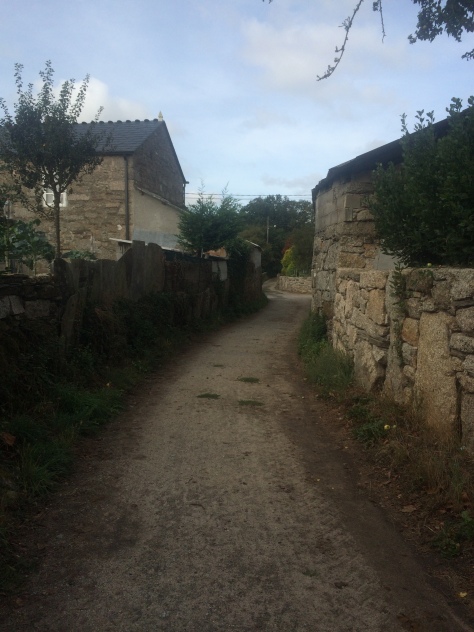 There I discovered a taxi whose driver was heading out for his day. This was pure serendipity. I had feared that I would end up walking all the way to Lugo before finding a taxi. I hailed the taxi and returned to Cadavo. The driver was somewhat incredulous that he had landed a fare in that tiny hamlet.

He got me swiftly to Cadavo and I indulged in a hot shower back at my hotel. After a bocadillo at a neighborhood bar, I set out to explore the town in the late afternoon.

Not all fountains in Spain and Portugal date from hundreds of years ago. This one was completed in the 1980s. 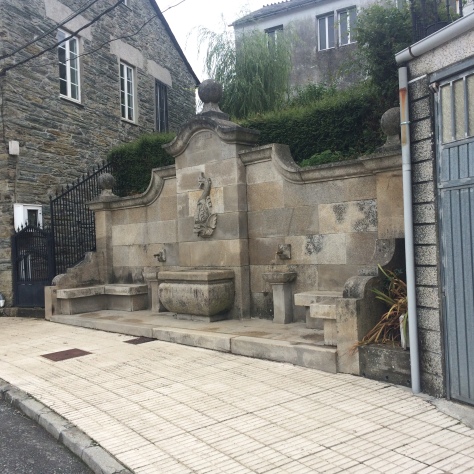 I came upon the town’s alberque which is a new one, but has only 20 beds and, at that time of year, many more peregrinos hoping for a place to spend the night than it has beds. I saw a half dozen dejected looking peregrinos heading toward my hotel in hopes of a vacancy. I don’t know how they fared.

I stopped in at a a small bar/restaurant a short distance from the alberque and learned that the hotel keeper was building a private alberque immediately adjacent to her establishment. It will have 40 beds! That is a very large private alberque, and it will provide capacity that will be greatly welcomed by future peregrinos.

I had a nice, but solitary, dinner that evening. All my peregrino pals had by this time arrived in Lugo. I would follow the next day, taking a taxi from Cadavo to Gondar and picking up The Way where I had left it the day before.

There I met a young American peregrino from the Midwest.  He had completed his degree at an American university and was walking the Camino before continuing his studies at the London School of Economics.  Wow!  We walked together for a time and I let him go on ahead.  He had a tight schedule ahead of him.

And one more interesting thing about this very respectful young man.  His given name was, “Miller.”  I had never before met anyone with my surname as his given name.  You never know what you will discover on The Way.

As one approaches Lugo, the environment becomes more suburban, but agricultural pursuits are still prominent.

Crossing the A-6 highway on the approach to Lugo, I found this admonition to future peregrinos passing by, followed by a pointed response:

After traversing the residential neighborhoods on the outskirts of Lugo, the peregrino crosses a river and the railroad, eventually climbing up and into the center of Lugo, the old town.  The Camino has long been a part of Lugo and its public infrastructure reflects that long history. 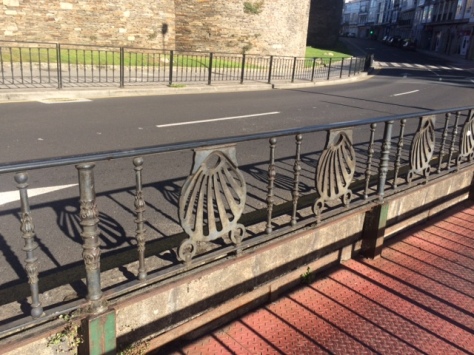 Historically, Lugo was a walled city originally built by the Romans, but one that changed hands a number of times over the centuries. The wall which surrounds the old town is the largest of the surviving Roman walls – 2 km long, 8.5 meters high, and featuring 85 rounded towers. 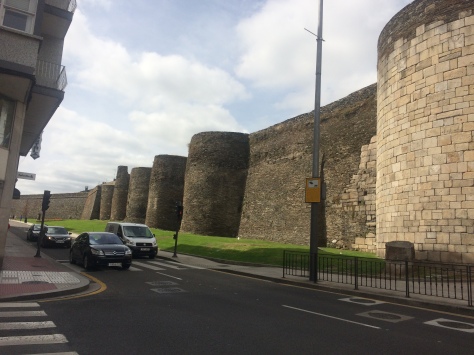 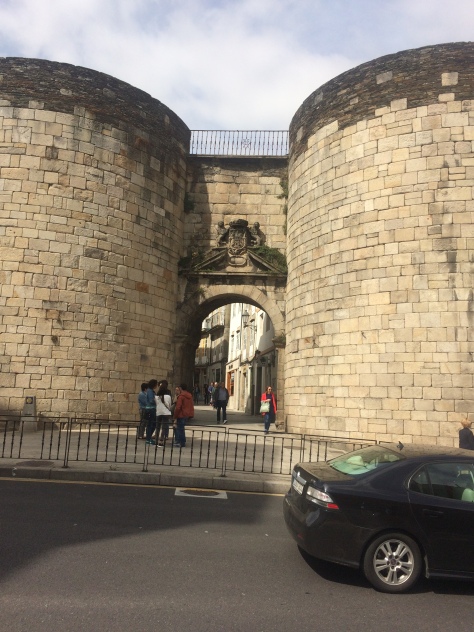 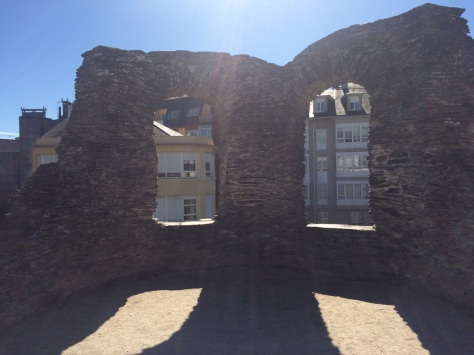 I had arrived on a Saturday and the town was festive. There were many tourists and quite a number of peregrinos just starting their journey on The Way. Lugo is a bit over 100 km from Santiago – which permits a pilgrim to begin in Lugo and qualify for a Compostela (a certificate of completion of the pilgrimage) upon arrival in Santiago.

I had a nice dinner in the old town that evening. Pemientos padron,dos pinxos, and vino blanco were a treat! 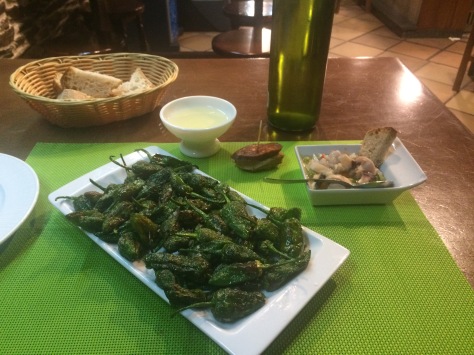 The next morning, I made my way to the Lugo railroad station and bought my ticket to Madrid. My reservation was for the next day, but I was there in time to observe a train departing Lugo en route to Madrid. (The video that follows is over two minutes in length. You may wish to skip it unless you are a dyed in the wool rail fan.)

I returned to the old town and visited the cathedral. 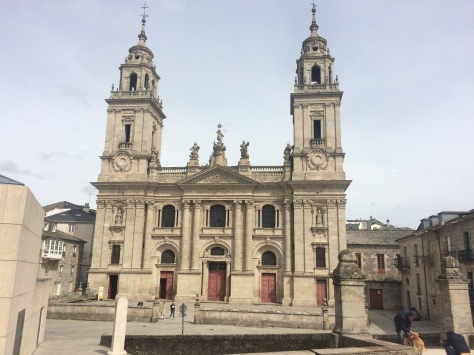 I walked the wall and noted the many varying structures immediately adjacent to it. Some were well kept. 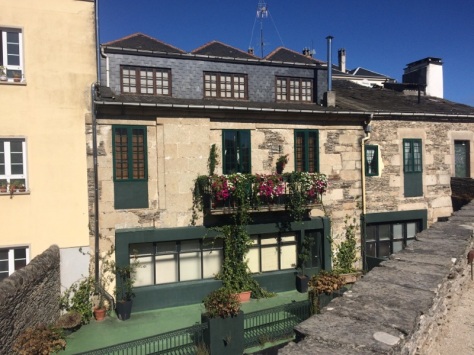 And some were in a state of profound decay – an opportunity for substantial reconstruction. 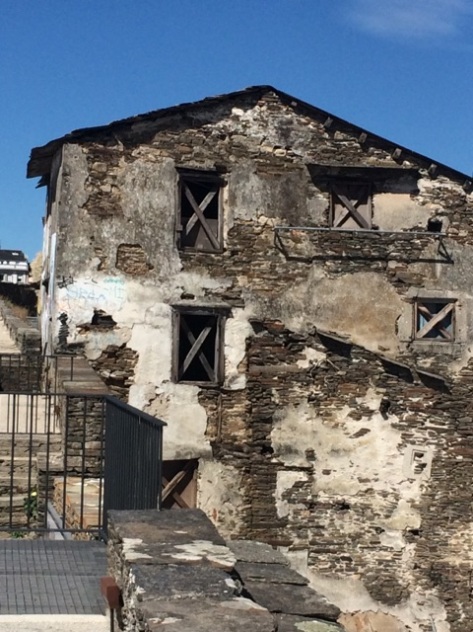 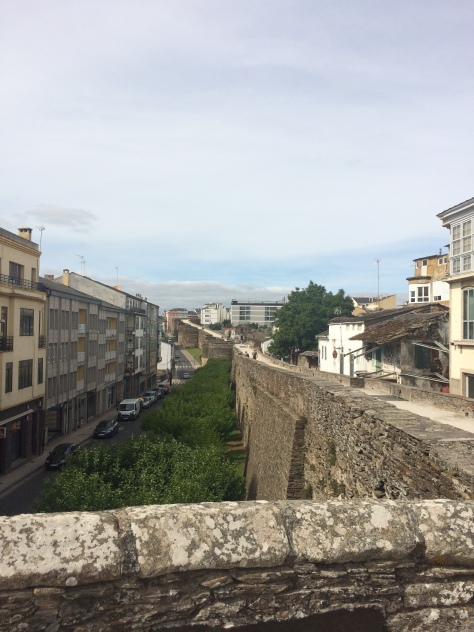 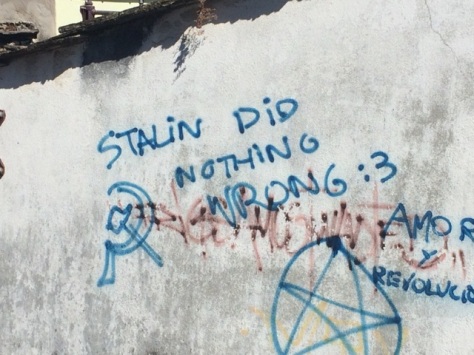 After circumnavigating the wall, I stopped at the cathedral and reflected on my journey.

In time, I collected a rock, and made this selfie:

My perigrenacion is not compete. It is interrupted – but to be continued. As I reported previously, I have run out of time to complete the Camino Primitivo as I had intended.  I’ll be back next year, walk the stages I had to skip this time, and complete my third Camino de Santiago.

At the insistence of Darlin’ Daughter – Elizabeth the Adventuresome – I plan to combine completing the Camino Primitivo adding a hike  with a hike somewhere in the U.K. Perhaps a coast to coast walk in England. Or perhaps the West Highland Way in Scotland. Or something else. Time will tell.

If you wish to be notified when I post again, click on the button on the lower right of your screen.  This may not be available on cell phones.