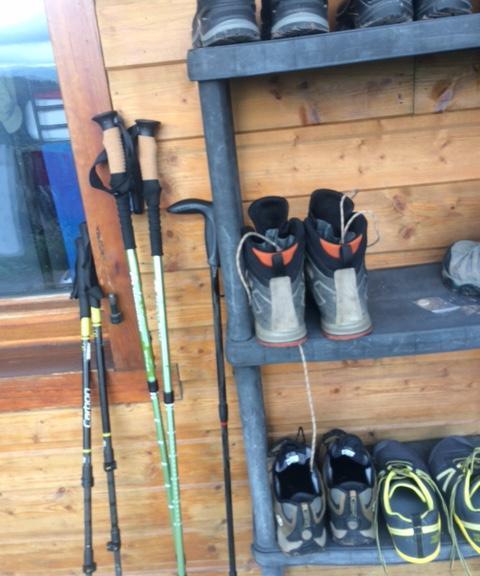 The flights from Glasgow to Paris and  on to Biarritz were comfortable and uneventful. The  city bus from the airport to the Bayonne SNCF station – a  block from my hotel, cost all of €1,00 and I had a nice talk with an American couple who were about to launch on their long-planned and greatly anticipated first Camino.

I decided to sleep in that night since  peregrinos are generally ousted from their albergue lodgings by 0830 each morning. The sleep was good but the  logistics turned out not to be great. I had intended  to take a 1215 train to St. Jean but considered that getting on The Way earlier than mid-afternoon would be a good
idea. So I asked the hotel to call me a taxi. I inquired of the driver of the cost to take me to St. Jean. €100,00 was the response.

That was decidedly more than a poor pilgrim should spend on
the first day of the Camino.

So I apologized to the driver for the inconvenience – observing that I didn’t even have €100,00 – and walked a block to the railroad station. (And stayed on the outlook for an ATM.)  The  ticket to St. Jean cost €7,60, a bus was substituted for the rail service that day, and I didn´t arrive until about 1330.

Upon arrival in St. Jean, I proceeded to the Pilgrim Office, received a sello (stamp) in my Credencial del Peregrino – my Pilgrim Passport that verified my status as a pilgrim and that would verify my peregrenacion upon arrival in Santiago.

I was ahead of the crowd arriving at  the Pilgrim Office. When I left, a long line had formed.

I headed for the Porte D’Espagne, the ancient gateway into Spain, purchasing what would be the first of many bocadillos – Spanish for “sandwich” – that keep body and soul together midday on The Way. Bocadillos generally consist of a couple of thin slices of ham slapped inside a crusty roll without benefit of mustard, mayo, lettuce or tomato.

They keep body and soul together, but would not be confused with a culinary triumph.

St. Jean Pied-de-Port translates as “St. John at the Foot of the Pass.” The pass in question is a gap in the Pyrenees through which the Camino path proceeds, and through which Napoleón withdrew his forces in 1812 toward the end of the Iberian Peninsular War
(retreating back to France in the face of the assault by Anglo-Portuguese forces). Local signage identifies the path as the Route Napoleón. Since this is Basque country, all official signage is in both French and Basque.

The gentle reader may recall from my post from Pamplona on April 7, 2015 (republished on April 14) (FCB ·12.1) that I had intended to walk the Napoleón Route to Roncesvalles when I intially walked the Camino Frances, but was warned off by the hospitaleros at the Pilgrim Office who reported that the mountain was closed because of snow, and that pilgrims had sometimes become lost in the snow, and died on the mountain. (This is a premise of Martin Sheen´s movie, The Way.) So in 2015 I walked the alternative route through Valcarlos.

This year, I came back to take on the challenge of the Napoleón Route.

But there were beautiful views along the way.

I arrived at Albergue Orisson at 1715. I was very glad to be there. I got the last bed in the albergue, fortunately having made a
reservation three months in advance of my hike.

The shower felt very good, indeed, though the automatic clock shut off the water at exactly five minutes. Thankfully, I had been forewarned!

As is always the case, the peregrino commaradarie is palpable. Dinner at Orisson that night was communal – a rich vegetable soup, roast chicken, mixed (albeit stewed too long) vegetables, bread, water, wine, and an assortment of small deserts. Yum. 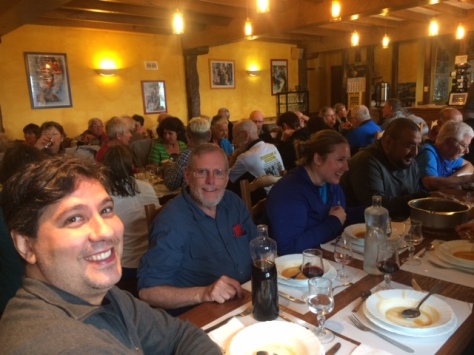 On the way up to Orisson, I passed a group of Spaniards who were walking as a group. Two of them were blind – each walking with one stick and holding to the backpack of a colleague. The gentleman toward the  end of the table with the dark glasses was one.

The Camino attracts all manner of pilgrims. Some are quite courageous. These gentlemen are among that number. Their bravery recalled for me another pilgrim I met along the Camino
Frances in 2015. She was an older woman with no legs. She had a fifth wheel bolted to her wheelchair and was using her arms to “crank” her way to Santiago.

The bunk was comfortable and the other nine peregrinos in the bunkroom were considerate. Unfortunately, two  of the younger but lamentably overweight men in the room snored loudly until about 0300. No one else slept until the snoring stopped. There were quiet hushed conversations to this effect at day brake. This is not unusual in the albergues, and accounts for my determination to proceed as an “en suite peregrino” whenever posible. It´s darn hard to hike if you haven’t had a good night’s sleep.

Dawn from Orisson. A beautiful vista, but rain clouds on the horizon!

After a characteristically inadequate Continental breakfast the next morning, we all set out to complete the 14 km trek up the mountain and through the pass. I shared part of The Way with an American couple.  We would cross paths several times over the next days.

We were met with more beautiful vistas, and a statue of the Virgin Mary at Pic de Orisson atop an outcropping of rock along  the way. 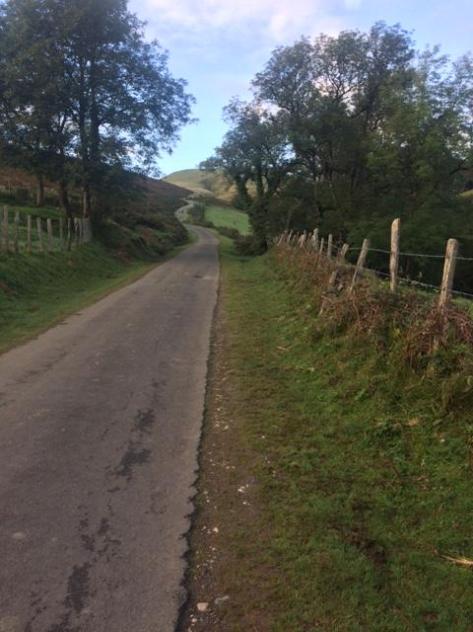 Further along there was a simple shrine to a peregrino who died on The Way.

The rain came later that morning and obscured most photo opportunities.

A fellow peregrino took this picture of  me just on the “other side” of the pass.

From here, the trail was generally level or slightly undulating,
eventually crossing a cattle guard that was strategically placed at the border between France and Spain. Pilgrims welcomed. Cattle, sheep, and goats, not! There were no other formalties.  A bit farther along, The Way passes the ruins of a customs house long ago abandoned.

The total meters ascended over the two days was 1390! The highest point – Col de Lepoeder – is 1450 meters above sea level.

I overnighted at Roncesvalles at a hotel there. Good thing I had a reservation – all 120 spaces in the albergue were taken and there were no vacancies at any of the other facilities. The number of expectant pilgrims overwhelmed the capacity of the entire town.

Dinner was good and I slept well, “en suite peregrino” that I am.

The next day, I embarked again on The Way From Roncesvalles  it proceeds through a gentle Wood.  Rain was falling. 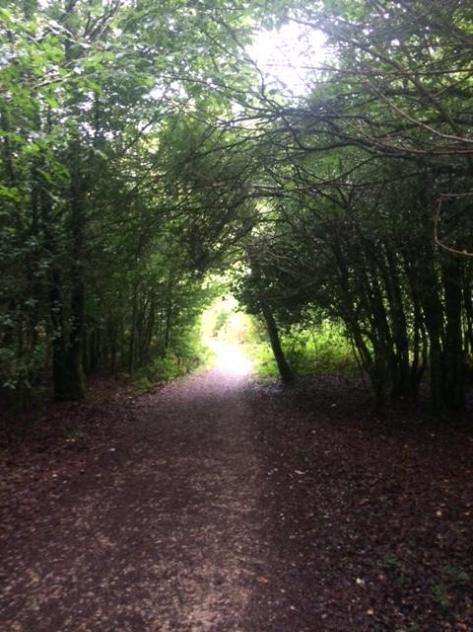 As the wood opens into a nearby village, it passes a cross,  one of many to be encountered on The Way. 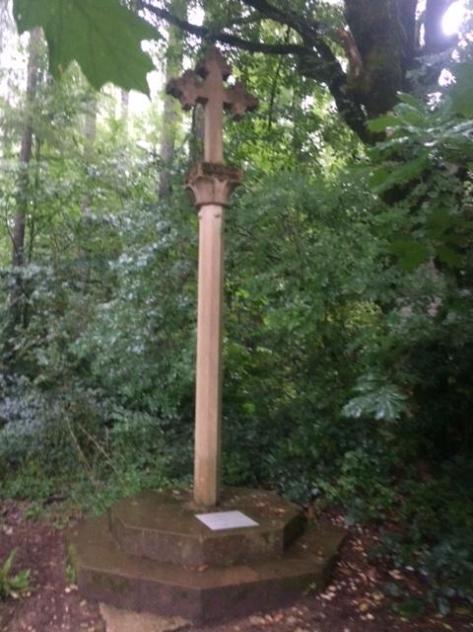 A nearby post had been annotated by a supporter of Basque independence. 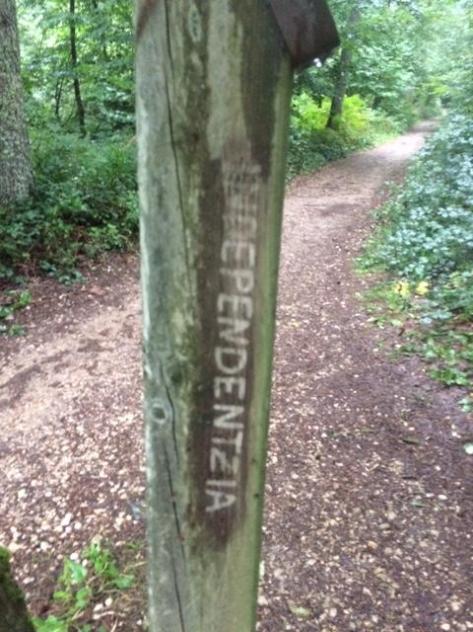 Murals greet the passing peregrinos welcoming them to the village of Burguete Auritz.

The early morning rain created challenges along The Way. But nothing great enough to stop or discourage an enthusiastic peregrino.

A memorial shrine at the top of a long climb was a welcome discovery.

There were some tough climbs in the  rain. Eventually the sky cleared, permitting this vista to be captured. The ruins are of
a former pilgrim inn, Venta de Puerto.

The large cohort of peregrinos who had descended on Roncesvalles on the previous day did not bode well for finding accommodation at Zubiri, the next town of any size to speak off. There had been speculation among those of us who had not reserved in Zubiri about what we would find when we got there. As it turned out, our fears were wholly justified. The whole town was sold out.

The several albergues in the town had beds for 142 pilgrims plus a few in private rooms.  The five pensions and two hotels also were sold out.  Yikes!

What to do? A cohort of four peregrinos – three American women and a gentleman from Cape Town, South Africa with whom I had been hiking in tandem, arrived ahead of me in Zubiri. The proprietress of a pension in town had located a small albergue out of town that could accommodate them. Fortunately, it also was
available to me.

Xavier, the hospitalero, drove to Zubiri, collected us, and brought us to the private albergue  he and his wife operated in Ilarratz, about
three kilometers farther along The Way from Zubiri. He also provided at no charge a lift to a nearby restaurant which offered a very good pilgrim menú for €12,00.

The albergue is so new that it is not listed in the several guides to the Camino.  Here is contact information.

A view of The Way from Albergue Ezpeleku. 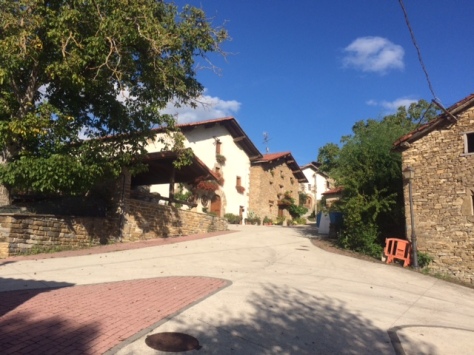 Two Australian women found the facility on their own, hiking out of Zubiri before we had arrived. We enjoyed overnighting with them at the albergue, having walked in tandem with them on and off during the day.

Peregrinos refilling their water bottles at a fonte near the alberque.

A little farther along, a 12th Century Abbey stands in remarkably good repair. 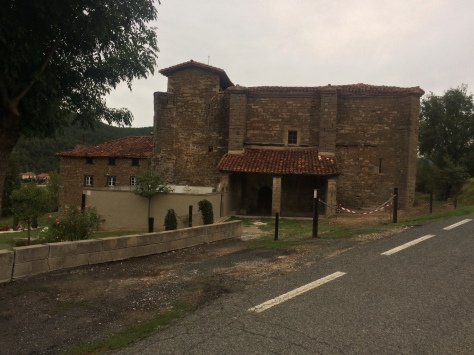 The Basques do not shrink from declaring their national identity.

Along the way, peregrinos had arranged the rocks to make a waymark for those who followed. 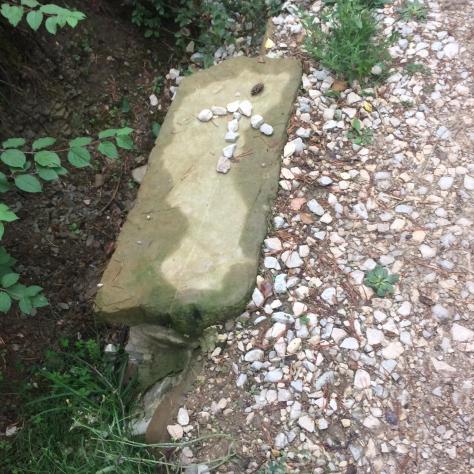 The Way follows the River Arga all the way to Pamplona.

The Way passes another memorial to a peregrina whose peregrenacion ended before she reached Santiago. 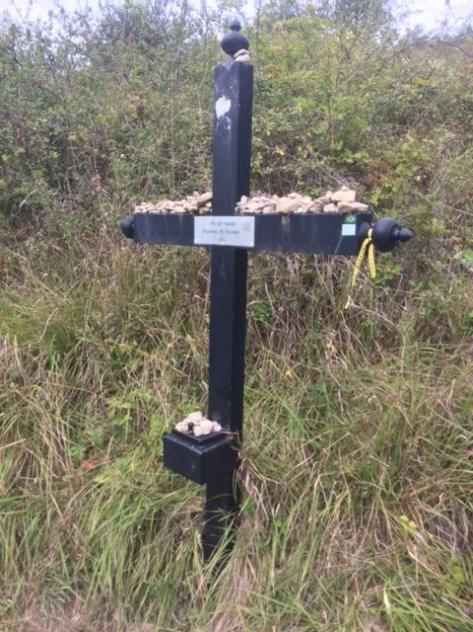 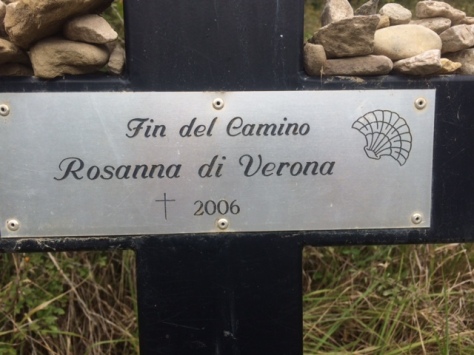 The entry to Pamplona is scenic, but along a noisy motorway.

An ancient bridge over the River Arga. (I remember it well from 2015!)

It was good to make it back to Pamplona.  It is a fun city, and upon reflection, the one I enjoyed the most during my 2015 peregrenacion on the Camino Frances.

A walk along the battlements of old yielded a view of the suburbs of Pamplona . . . of new!

Many cyclists cycle The Way. They are acknowledged with emplacements through the old town in Pamplona.

(This is another one for you, Stephen! Buen Camino!)

And, inevitably, political graffiti, the meaning of which is not clear to this peregrino.

The running of the bulls is celebrated even when they aren´t  running.  As is Ernest Hemingway.

The cathedral in Pamplona is grand and inspiring.  A magnet for Camino walkers and responds.  There is a wonderful plaque before the entrance.  It captures the many ways to say “Buen Camino!”

Having had a day to contemplate the completion of the Napoleon Route, I am glad I did it.  I´m sore and tired.  The baby steps I take on gravel trails meandering up and down mountain passes – to guard against falls – are hard on the calf muscles and the feet too!  But it was a worthwhile endeavor.

And Jim was with me every day.

Tomorrow I am off by bus to Oviedo, and then on to Tineo and Campiello to complete the peregrenacion along the Camino Primitivo that I began last year.

If you wish to receive future posts as they are published, click on the “follow” button on the lower right edge of your monitor.  This option may not be available on cell phones.