The bus ride from Pamplona to Oviedo was long, but interesting. The intercity buses in Spain – most operated by ALSA – are comfortable and swift. They assign seat reservations which gave me a window seat for much of the journey. More beautiful Spanish countryside and a nice view along the coast for part of the way.

My lodging in Oviedo was directly across the street from the major retail shopping district. Very few restaurants there, but eventually several appeared as I strolled through town. The cathedral is illuminated at night. Truly grand!

The next day, ALSA took me from Oviedo to Tineo where I formally rejoined the Camino Primitivo by securing a selle (stamp) in my credencial del peregrino. The hotel there is a dual facility – a well appointed albergue in the basement with the usual communal bathrooms and sleeping cubicles. This en suite peregrino chose a room upstairs in the hotel. The staff was most helpful in reserving for me accommodation for the next night in Berducedo where I overnighted after walking the Hospitales Route. In fact, the accommodation was in the same casa rural that I stayed in last year when I arrived in Berducedo after walking the Pola de Allande alternate to the Hospitales Route. But. . . there were no private rooms for this or any other peregrino booking so late! I was grateful to secure a bed in the albergue in the basement of the casa rural. It was clean, the other peregrinos respectful of each other, and I slept well.

The gentle reader will recall that last year I walked to Berducedo via the path through Pola de Allande – longer than the Hospitales route, but easier on the legs and with the opportunity to overnight half way in Pola. This year, I decided to walk the Hospitales route – again like the Napoleón Route – over the mountain rather than around it.  Why engage these challenges? Like Sir Edmund Hillary said, “because it was there.”  I don´t fancy myself Sir Edmund, but the rationale seems to me to apply here.

I engaged a taxi from Tineo to take me to Borres, a tiny village not far from where The Way divides with one path to Pola and one to the mountain.

I had walked to that point last year before choosing to follow the route through Pola. The Way from Borres starts with a climb. Hey, this is the Camino!

The minders of the Camino, in this case the government of Asturias, were quite direct in informing peregrinos of their choices where the Way splits. Distance and elevation both were addressed. 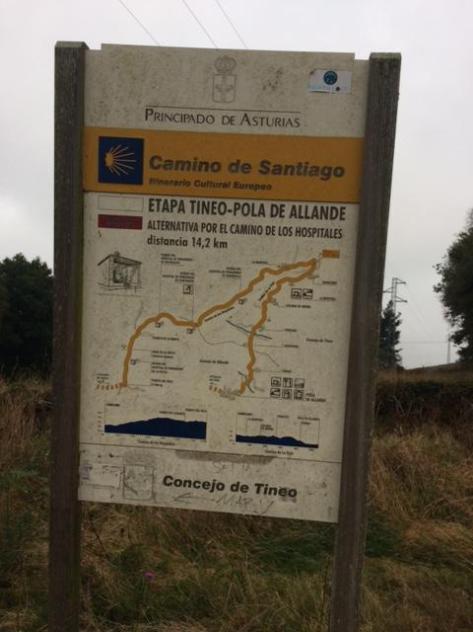 The Hospitales Route is 16.5 kilometers (10.23 miles) in length from Borres to Montefurado and involves many ascents and descents.

There are no facilities on the Hospitales Route. No food, no water, no connectivity! Peregrinos are well advised to be well provisioned before they start. I had three bottles of water of varying sizes, some bread left over from breakfast, and a can of prepared peas and meatballs I had purchased in Tineo. (I also had my trusty 3-in-1 dining tool – part spoon, part fork, and part serrated knife.)

Before launching on the first real ascent, the Camino Primitivo passes through a tiny village.  As is often the case, The Way passes by small chapels that are still in use.

After surmounting the first real ascent of the day, peregrinos were greeted by a solitary bovine who seemed unconcerned – perhaps bemused – by our arrivals and departures. 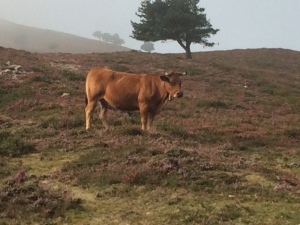 We saw many more cattle, sheep, and horses along The Way. We also saw beautiful scenery, sometimes partially shrouded in fog. 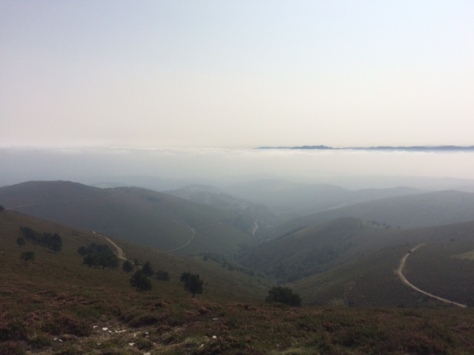 Eventually the Hospitales Route unites with the route through Pola after a long climb, which ever route the peregrino has chosen.

From here it is a long way down from the mountain, but eventually the peregrino reaches Berducedo and – hopefully a place to lay one´s weary body.

Out of curiosity, as I massaged my feet after the day´s walk, I checked the “Health” App on my iPhone, mindful that I had walked not only the 16.5 km over the mountain, but an additional 7.4 km to get to Berducedo.  The App reported as follows. . .

Then the kindly App, seeking always to improve the well-being of its accolytes admonished me:

Whereupon, mindful that I had just walked 15 challenging miles that day, I determined to delete that App.  Take that, “Hal.”

Peregrinos and those who attend them are not the only inhabitants of Berducedo.

Having walked from Berducedo to Grandas de Salime last year, I opted for a taxi that allowed me to continue my peregrenacion without unduly repeating what I accomplished last year. I sent my bag along to A Fonsagrada but asked the driver to drop me at Grandas de Salime where I could pick up where I left off last year. I began at the Collegiata  de El Salvador.

The Way traverses pleasant countryside which included this eucalyptus plantation.  It is a species of eucalyptus with which I am unfamiliar.  Eucalyptus can be raised for raw material in papermaking.

I returned to Pension Casa Monolo in A Fonsagrada, the same accommodation where I spent one night last year. I remembered the innkeeper, and he remembered me!

Down the block was a cruciero reminding the faithful of their faith. 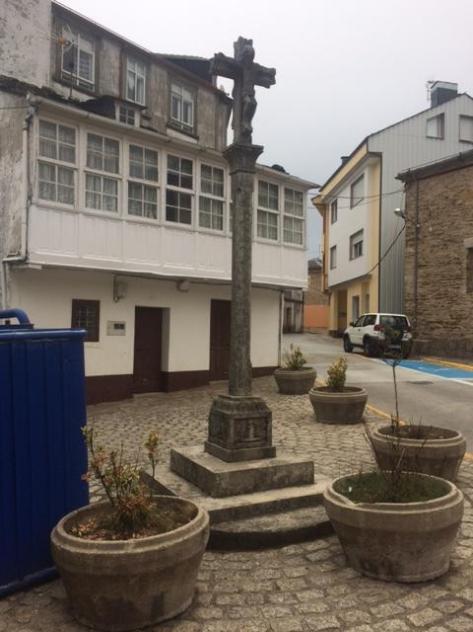 There was a festival going on that weekend.

A caballero and his horse danced nimbly with a señora in traditional garb while the townsfolk watched approvingly.

[I am sorry that my intended longer recording did not take.]

Townsfolk in traditional costumes danced and others played Asturian bagpipes.

There were a selection of amusements for children.

That evening the dancers and musicians called at Pension Casa Monolo and performed again.

Again, having previously walked the stage from Cadavo to Lugo, I indulged in onward travel by intercity bus the next day which brought me swiftly to Lugo, in time to return to the wall built by the Romans that rings the ancient city.

The gentle reader will recall that almost exactly one year ago, I was forced to curtail my peregrenacion because of delays I had experienced due to weather – hot, cold, and wet – depending on the stage along The Way. See FCB #26.

Well, I´m back, with the rock that I took then from the battlement way by the cathedral.

[Nothwithstanding possible technical issues in this presentation, I believe the video will play in the appropriate orientation.  FCB]

I spent a few minutes exploring, as I had done last  year, the graffiti posted near the cathedral.  Again, see FCB 26.  The one about Stalin was still there, and not challenged.

And nearby there was a new one, I believe (from the style), offered by the same anarchist. 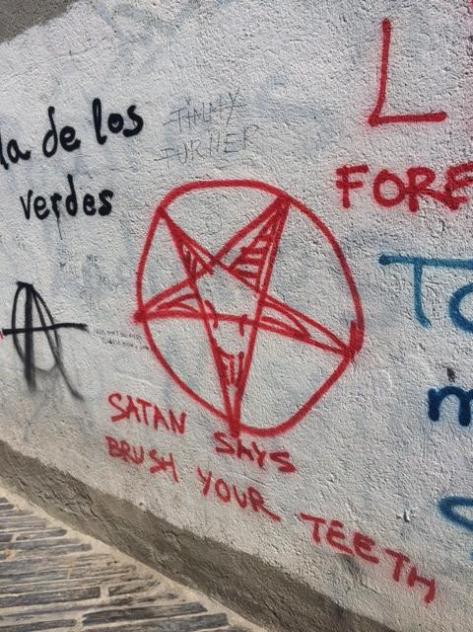 And as I reported last year, there are many grand structures awaiting rehabilitation.

If you would like to receive future posts as they are published, click on the “follow” button on the lower right corner of your monitor screen.  This feature may not be available on cell phones.